Actor John Dumelo is advocating a concerted plan to encourage the cultivation of ‘weed’ for export.

He believes that Ghana stands to rake in billions of dollars if the country pays particular attention to exporting of marijuana.

“A lot of countries and even religious institutions are cashing in on the Marijuana trade. Here’s my take. The Ghana gov can look into setting up the farm. The marijuana will be solely for export, no local consumption,” John Dumelo said in a tweet.

The actor advocated further that, “That way Ghana can cash in on the billions of dollars. We need revenue for infrastructure, paying of salaries etc. We have all it takes to generate that. Let’s stop talking and start trading.”

This will not be the first time John Dumelo is advocating for the country to tap into the potentials of ‘weed’.

In January this year, the actor, speaking on Cooks and Braggarts, a cooking show hosted by Yvonne Okoro, he said the country can benefit more from the medicinal advantages of Marijuana after it is legalised.

“When you go to some of the Western countries, it [Marijuana] has been legalised for health purposes and we can also do same,” he stated.

He quizzed, “If alcohol and cigarettes are legal in Ghana, why not marijuana.”

Several other personalities, including Kwaw Kese, Samini and Blakk Rasta, have all called for the legalisation of marijuana. 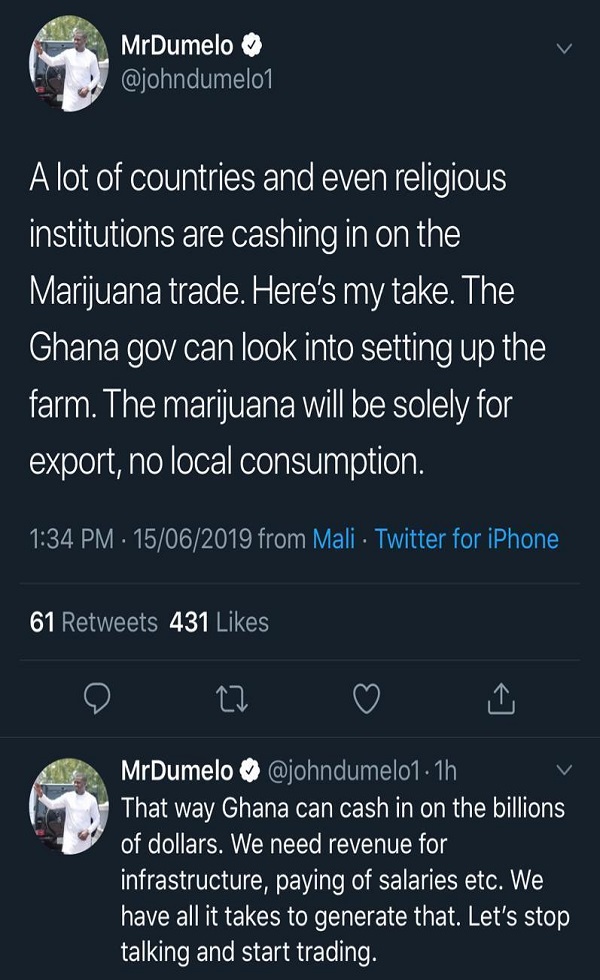 
Australian Open: Djokovic drops set to Struff but roars back to reach second round
Captain One Golf Society tourney tees off on January 25 In Obuasi
Opinion: Evron Hughes writes on gov't's FX Development Committee
Eastern Region ECG recoups ¢949,116 from power theft
Opportunity International holds management performance review workshop
2 finance officers arrested, handcuffed at Public Accounts Committee hearing
We don’t have to do it alone: Lessons from Asia for Ghana
All is set for another demo against new voters’ register as police approve routes in Kumasi