The unnecessary political twist and turn of the GHs9.7bn bond

The ‘$2.25bn’ Templeton bond saga is a classic example of ‘PR motivated by political spin’ gone bad. I am a strong believer in institutional policy making and cringe when politicians seek to overwhelm the technical space of public relations. The art of PR makes one minded that your public is not restricted to your customers but include competition and other stakeholders. Needless to say, politicians ought to be reminded that their public involves more than the electoral public. Focus on sharing facts and cut the political spin.

I ask, of what value was the announcement that a ‘$2.25bn bond, was successfully issued? Did politics seek to show that over 2bn was done when others struggle to do 1bn? Totally needless. For starters, there were no dollar bonds so why state them into dollars? Share official facts and outsource the spin. You announce a USD size bond and then create room for the opposition to battle the legality and legitimacy of the transaction. We all know external borrowing requires parliamentary approval but not local borrowing whose cap is limitless. The bond size was simply Ghs9.7bn.

Lesson 1: Don’t throw an unnecessary punch, you may just awaken your opposition.

Lesson 2: Just share the facts. Cut the spin. Outsource the spin if necessary. This is governance, not elections.

Lesson 3: Allow technocrats to do their work!

Obviously, almost every opposition somewhat hopes to be a nuisance under a government’s skin. When it fails to be constructive over time, the opposition will lose credibility, which is in itself a major threat to democracy and the critical watchdog role it plays.

Let’s get a few facts clear.

The Bond was not a USD bond so why question the legality of the bond issuance for lack of parliamentary approval? Our Cedi bonds and treasury securities have for a while now been open to foreign investors. The prospectus was clear in its distribution clause stating the condition below

When foreign investors seek to partake in local bond subscriptions, they will naturally bring in foreign currency which is often exchanged for Cedis at the central bank to enable them to participate in the trade. This exchange does not make the bond a dollar bond. For example, changing your 10 dollars gifted you by your uncle at a forex bureau to pay your 40-cedi electricity bill does not make ECG bills dollar tariffs.

To a good extent, knowing the facts and insinuating otherwise nurtures the growing negative perception of the credibility of politicians.

There is no rule about the duration between the notice and the issuance date or book build close. It is totally dependent on the issuer and its confidence about the market as well as the funding urgency. If notices are inadequately short, it reflects in the market’s response. In this case, the market responded positively. In the last 2years, the duration between the day of notice and book build close has varied between 3 and 12 days. In this instance, it was just a day. Any issue with this? I see none.

Some have questioned the auction window which opened and closed in a day. For starters, it is not the first and will not be the last. The 2013 Ghs400mn 3yr bond was also opened and closed in a day. The duration of an auction is often moderated by the assessed market confidence. Serious investors do not need much more time after ‘road shows’ or investor engagements amidst a 24hr price guideline notice? If it were inadequate, it would have reflected in the bond pricing and subscription.

Local investors were allowed to participate but as things turnout often in our bonds market, foreign investors have proven more confident in Ghana than local investors.  Local investors comparatively shy away from longer term bonds as can be observed from the Central Securities Depository report for March 2017, below. They are more active in the short end of the curve. 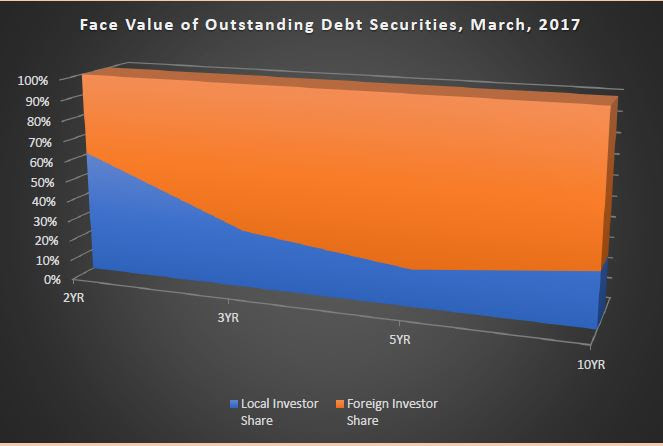 The data above clearly provides direction as to which investors to primarily engage for long term bonds like the ‘Ghs 9.7bn’ bond. Obviously, book runners will seek to focus on foreign participation of which Templeton remains Ghana’s largest foreign investor before and after the bond issue.

I don’t see how. Legacy Bonds Ltd subscribed to Ghs900m worth of bonds issued by the Bank of Ghana (not GoG) to fund a part of the BDC debt in December 2016. The bonds were issued at a coupon of 18.5%. By January and February 2017, the bond was trading at a yield of between 20.5% and 22.85% on the secondary market despite having 90day T-Bills below 20%. Typically, for a market as volatile as Ghana, the longer the tenor, the higher the risk and yield required by investors. With BoG rated safer than GoG, the market is expected to demand higher yields for GoG securities than BoG bonds. It is, therefore, reasonable and very competitive to accept bond bids below 20% for the GoG long-term bonds in recent times.

First, a roadshow does not imply travelling in first class cabins across the world to talk about your bond issuance intentions. It implies meeting up with potential investors, sharing investment information to whip up an appetite for the floating of your securities. While it may involve travelling around to meet people, it is not a necessary condition if you are well networked within the investor community to rather engage remotely. There sure was a roadshow and it did not need an announcement.

Templeton is easily the largest non-government foreign investor in Ghanaian securities. It would have been ridiculous and immature for the Government not to have engaged them on their participation in a possible bond issuance. Meeting Templeton cannot be wrong and they were surely not the only ones contacted.

Absolutely not. The bond was openly traded on the Central Securities Depository platform. Any dealer surely had access to trade. Other foreign and local investors participated in the subscription.

This may be more legal than finance but I don’t see where the market got shortchanged? The process was open to all, the market had prior wind of Government’s intentions through the ‘road show’ engagements. It was not abnormal to engage foreign and local investors over issuance intentions and Templeton was one of them. In fact, it would have been ridiculous and irresponsible to not engage Ghana’s largest foreign investor, Templeton, prior to issuance. Especially when it is known that long-term bonds will be more patronised by foreign investors. The pricing was within the book runners expectations and lower than yields on less risky securities.

Politicians ought to be careful how communication over financial issues are managed in a relatively fragile market as ours. Poor or ill-informed communication heightens the political risk investors observe and feeds into our country risk, thereby increasing the global cost of capital to government and business.

While being critical is important for the growth of our markets and democracy, our critique ought to be constructive and well informed to avoid the continuous depletion of confidence in politics.