Reading FC coach Jaap Stam has spoken about the situation involving Asamoah Gyan, and says the Ghana captain did fail a medical.

Gyan has, in the past week, hit out at what he called "unprofessional" behaviour of journalists who put out the story that he was medically unfit to pass a medical with the Royals just over a week ago.

The Shanghai SIPG player took to Twitter and wrote: “Am proud of my Country. No one can stop me from serving my country. Ghana made me who I am today.”

All these came after what was expected to be a surprising move to the Championship side had fallen through.

In all his interviews with the media last week, including one with Joy Sports Benedict Owusu, the Ghana star said the Reading deal for one reason only: because he was asked by one club official not to play in the Africa Cup of Nations, which starts in January.

Speaking at the Royals' pre-match presser ahead of a game against Ipswich on Friday, Stam ripped into the claims by Gyan. Herewith are the quotes from his Hogwood Park interview.

"Yes. [Gyan] wasn’t in very good shape. When he joined us they did a very good medical on him which was very important because he’s been injured in the past. He hasn’t been playing a lot of games."

"You need to be sure, if you bring a player in, that he’s fit and not that you need to work him for six to eight weeks to get him in shape. And maybe there’s a risk of him getting injured during that period so he’s out for a longer time."

"And then he needs to go to Ghana in January and we lose him for two months. So it’s a big risk."

"He wasn’t in good shape, that was the case. Of course the player says he was in good shape because he wants to play, but he wasn’t. Our medical people are not going to be lying about that. That’s why we made the decision not to sign him."

"Potentially getting someone in like that shows you mean business."

"To be honest he wasn’t that expensive and you have to think why can he leave his club? Is there a reason he can leave that club if he’s that fit? So you have to think about that as well. But we’re always looking for quality strikers."

"He did well here in the UK, he did well in Saudi Arabia, in China and with the national team. If you see him play you can see he’s a quality striker."

"But we have to be sure because we don’t have much money to spend on players or wages.

"If we’re going to be spending money then we need to be sure it’s on a player who is fit and ready to produce for us." 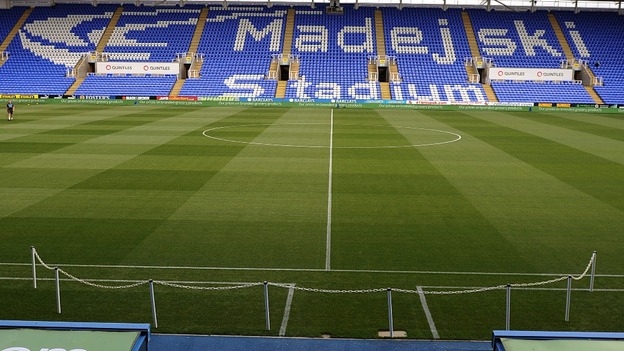 The Dutchman's lengthy presser is in sharp contrast with the club's official reaction when contacted by Joy Sports last week.

His comments now confirm earlier reports from a local Reading website that Gyan's lack of match fitness needed six to eight weeks before he was up to full form - a key reason the Royals decided against the intended loan deal.

Jaap went to explain how the interest for Gyan had even started.

"When we played Cardiff - it was around that period. We knew at the time the qualities he has. Everyone was excited about getting a player like that."

"But every player you bring in - especially a player of a certain age - you look at his past. Then we have a medical, which was very important to see how he was."

"If the results are that bad that you need to work him for a long tome to get his fitness up then you need to think about it. You don’t want to take a player on, spend money on him, and then not be able to use him.

"I’ve been a player myself and certain players look for excuses for certain situations. If you are not fit - you are not going to go to your country and play. That’s it."

"If he was fit and ready to play for us, then of course we would be happy to let him go to Ghana to play for his country. It’s the same for all the players."

"If [Reading players] Quinn or McShane or McCleary or Gunter are not fit, they are not going to be playing for their country. They are going to be staying over here to have treatment because the club is paying their salary and we need to work with them for the whole season.

Stam then denied Gyan's accusations of Reading not wanting him to play for Ghana.

"It’s not about we don’t want him to play for Ghana. To be fair that’s a load of rubbish. It’s not about that at all. If he was fit and ready to play for us at 100 per cent then we would be happy for him to go to Ghana and play his games over there."

"But because that wasn’t the case we said to him, if you are not fit you can’t go to Ghana because you need to work over here to get into shape and eventually play for us. After that you can play for Ghana."

A few hours after this Stam interview, Asamoah Gyan - who signed a year long loan deal at Emirati club Al Ahli Dubai after this Reading move collapsed - scored on his debut. Click here to see the video of his goal on Wednesday.