Comedian who played President on TV to become Ukraine's President

Mr. Zelensky’s triumph hits back at years of Russian propaganda presenting Ukraine as a failed state dominated by fascists steeped in anti-Semitism and contempt for Soviet fighters who defeated Hitler’s forces in World War II.

The comedian Volodymyr Zelensky won a landslide victory in Ukraine’s presidential election, according to official results with nearly all of the votes counted, making a comic actor with no experience in government or the military the commander in chief of a country that has been at war with Russian proxies for over five years.

With more than 95 percent of ballots cast on Sunday counted, Mr. Zelensky had won 73.17 percent of the vote, compared with just 24.5 percent for Petro O. Poroshenko, Ukraine’s incumbent president. Mr. Zelensky triumphed in every region, except for the area around the city of Lviv, a center of Ukrainian culture and nationalism in the west of the country.

Ukraine’s central election commission said that final official results might not be ready until April 30 because of the upcoming Orthodox Easter holidays.

Mr. Zelensky’s victory will give Ukraine its first Jewish leader and deliver a stinging rebuke to a political and business establishment represented by Mr. Poroshenko, a billionaire candy tycoon who campaigned on the nationalist slogan “Army, language, faith.”

After five years of grinding war with Russian proxies in the east of Ukraine, voters appeared to send a signal that they were more concerned with the internal menaces of corruption and poverty — ignoring Mr. Poroshenko’s warning, delivered after he cast his own ballot on Sunday, that voting for a comedian “is not funny” and could lead to “painful” consequences.

Speaking at his campaign headquarters in Kiev, the Ukrainian capital, moments after the scale of his apparent victory became clear, Mr. Zelensky took a jab at Russia and other former Soviet lands that have turned elections into empty rituals that merely confirm their authoritarian leaders’ continued rule.

“As long as I am not officially a president, I can say as a citizen of Ukraine to all countries of the post-Soviet Union: Look at us — everything is possible,” Mr. Zelensky said. 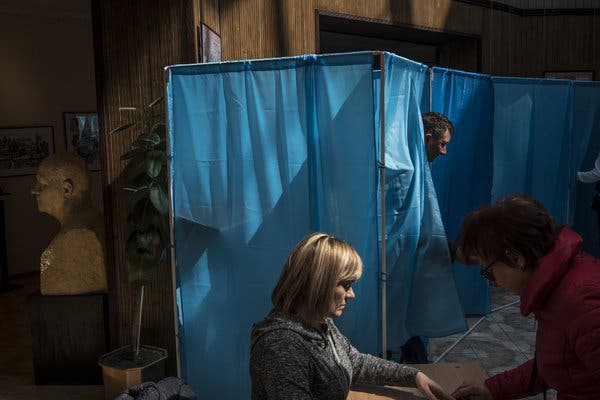 A poll worker assisted a voter as others cast their ballots at a polling station in Kiev.CreditBrendan Hoffman/Getty Images

Mr. Poroshenko conceded that that his presidency — which began in 2014 after street protests ousted Ukraine’s deeply corrupt, pro-Russian president, Viktor F. Yanukovych — was over.

“‘Never give up’ — I also hear that now,” Mr. Poroshenko said on Sunday night in Kiev. “But when I see the results of these exit polls, they are obvious and give reasons to call my opponent now and congratulate him.”

Mr. Zelensky’s triumph hits back at years of Russian propaganda presenting Ukraine as a failed state dominated by fascists steeped in anti-Semitism and contempt for Soviet fighters who defeated Hitler’s forces in World War II.

Though part of a trend that has brought the rise of maverick political outsiders in the United States and Europe in recent years, Mr. Zelensky has shunned populist themes like hostility toward immigrants and minorities. Ukrainians worry less about outsiders coming in, and more about the large number of their own people leaving to work in Poland and other wealthier countries.

Ukraine has the lowest economic output per capita in Europe, according to figures released late last year by the International Monetary Fund.

Two revolutions delivered only disappointment after the country gained independence following the 1991 collapse of the Soviet Union. While desperate for change, some of Mr. Zelensky’s supporters acknowledged that they could not realistically expect him to transform the country quickly.

“He promises utopia of course, but let it just be different,” said Natalia Melnykova, 42, who added that she did not like either candidate on Sunday’s ballot, but had voted for the comedian.

“I want something to change,” she said. “Let the youth try.”

The prospect of a smooth transfer of power after a boisterous but mostly orderly election campaign shows how far Ukraine has moved away from Russia, where listless elections offer no real competition and, for nearly 20 years, have kept President Vladimir V. Putin in power. 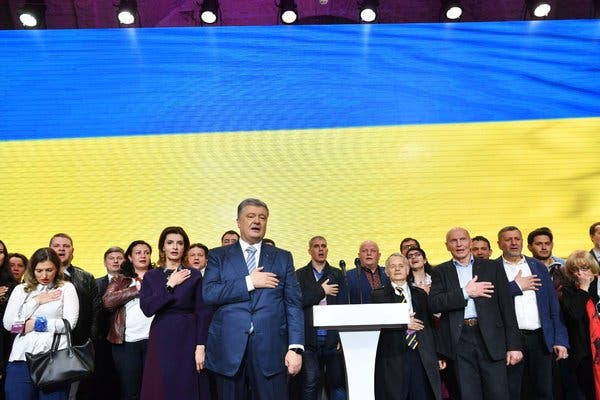 “The beauty of this election is that we did not know when it started who was going to win,” said David J. Kramer, a Russia expert who was an assistant secretary of state under President George W. Bush. “It is not a preordained exercise.”

As of Sunday afternoon, polling had been calm and free of notable irregularities, said Mr. Kramer, who is in Ukraine with a team of election observers from the International Republican Institute, an independent group.

Many voters said they had supported Mr. Zelensky not so much because they thought he was a good candidate but because they wanted to punish Mr. Poroshenko for deflating the hopes raised by Ukraine’s 2014 revolution and for doing little to combat corruption.

Mr. Poroshenko tried to rally support during the campaign by promoting himself as a defender of Ukraine’s national interests against Mr. Putin, while Mr. Zelensky focused on what he said was the incumbent’s failure to deliver on promises to end crooked deals between officials and Ukraine’s powerful oligarchs.

Mr. Zelensky, who plays a teacher who improbably becomes president in the hit television series “Servant of the People,” wound up his campaign on Friday by lambasting Mr. Poroshenko at a raucous debate before more than 20,000 people in a Kiev sports stadium.

Referring to a 2017 pledge made by Mr. Poroshenko to tackle graft and “cut off the hands of those who steal in the army,” Mr. Zelensky asked, “Why do your people all have both their hands?”

Speaking to supporters on Sunday evening in Kiev, Mr. Zelensky said: “Thanks to all the Ukrainian citizens who voted for me, and to all who didn’t. I promise I won’t mess up.”

Volodymyr Ovseychyk, 21, a defense studies student, said he had voted for Mr. Zelensky because he did not want “to vote for politicians who have been in power for five years and have done almost nothing.”

He added that he hoped Mr. Zelensky would turn out to be a leader like Ronald Reagan.