Greta Thunberg, the Swedish schoolgirl who has inspired an international movement to fight climate change, has been nominated as a candidate to receive this year's Nobel Peace Prize.

She was nominated by three Norwegian MPs.

If she were to win, she would be the youngest recipient since Pakistan's Malala Yousafzai, who was 17 when she received the prize.

Ms Thunberg tweeted she was "honoured" to receive the nomination: 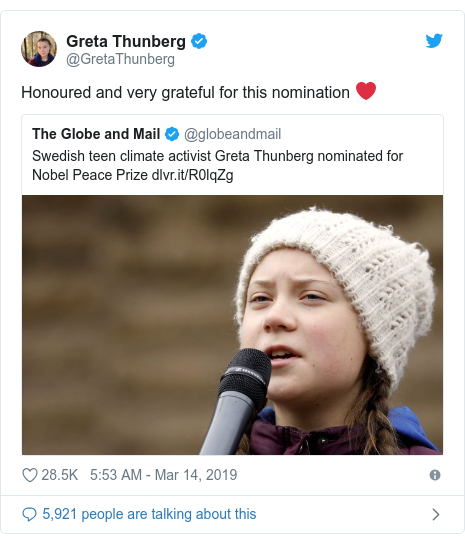 "We have proposed Greta Thunberg because if we do nothing to halt climate change, it will be the cause of wars, conflict and refugees," Norwegian Socialist MP Freddy Andre Ovstegard told AFP news agency.

"Greta Thunberg has launched a mass movement which I see as a major contribution to peace," he added.

What are the school protests? 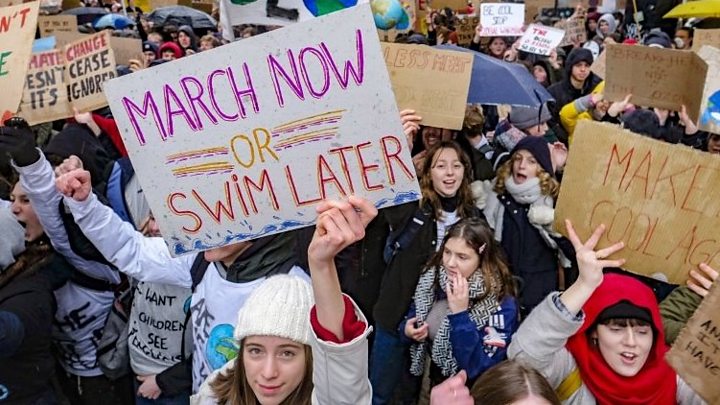 On Friday, thousands of schoolchildren are expected to strike again against climate change in more than 100 countries around the world.

The school strikes were inspired by the Fridays For The Future movement started by Ms Thunberg under the hashtag #FridaysForFuture.

So far, there have been regular walkouts around the world, including in countries likes Germany, Belgium, the UK, France, Australia and Japan.

Who is Greta Thunberg?

The Swedish teenager – who on her Twitter page describes herself as "a 16-year-old climate activist with Asperger [syndrome]" – first staged a school strike for the climate in front of the Swedish parliament in August last year.

Since then, she has been missing lessons most Fridays to stage her regular protests.

She continued to gain international attention after speaking at the UN Climate Talks in Poland in December and at the World Economic Forum in Davos in January.

"On climate change, we have to acknowledge that we have failed," she told global economic leaders in Davos.

How is the Nobel Peace Prize nominated and chosen?

National politicians, international officials, academics and previous winners are among those who can nominate potential recipients.

The prize is announced in October and awarded in December in the Norwegian capital, Oslo.

There are 301 candidates for the Nobel Peace Prize for 2019, out of which 223 are individuals and 78 are organisations, says the Nobel committee on its website.

The names of nominators and nominees are not normally made public until 50 years have elapsed, it adds.