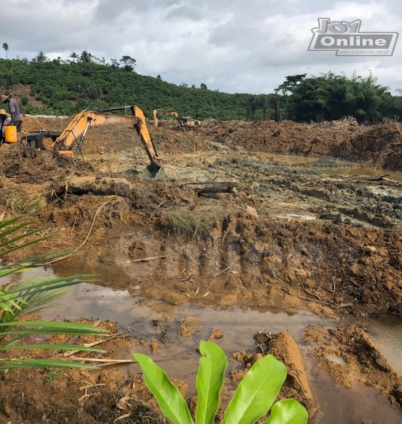 The country has lost 19,000 hectares of cocoa farmlands to illegal mining, according to the Ghana Cocoa Board (COCOBOD).

According to the Public Relations Officer of COCOBOD, this was uncovered in research the outfit undertook earlier this year.

Fiifi Boafo who was on Joy FM’s Super Morning Show, said the lost lands represent two per cent of the cocoa farms in Ghana.

“And indeed, that was at the beginning of the year we’ve commissioned another research now and we think it will be worse than this,” he said on Thursday.

Mr Boafo bemoaned the devastating effects galamsey activities have had on the cocoa industry.

According to him, farmers now carry water from their homes to irrigate their plantations due to the pollution of water bodies that used to serve the purpose.

“The effects of illegal mining are far more than we are talking about. River bodies within the farming bodies are so polluted farmers are unable to use them to irrigate the farm. In instances where farmers use polluted water, every flower, as well as the pod on the tree, dropped.

“So there is the need to carry portable water from their houses to the farm to spray their cocoa,” he opined.

Conservations surrounding illegal mining resurfaced two weeks ago, after the second arrest of galamsey poster girl, Aisha Huang and two of her accomplices.

The Chinese national was first arrested in 2018 and deported in 2019. However, the galamsey kingpin managed to infiltrate the country again to continue her illegal mining activities.

Many have since accused the AkufoAddo government of failing to clamp down on galamsey as it promised.

DISCLAIMER: The Views, Comments, Opinions, Contributions and Statements made by Readers and Contributors on this platform do not necessarily represent the views or policy of Multimedia Group Limited.
Tags:
Cocoa
COCOBOD
Farmlands
Fiifi Boafo