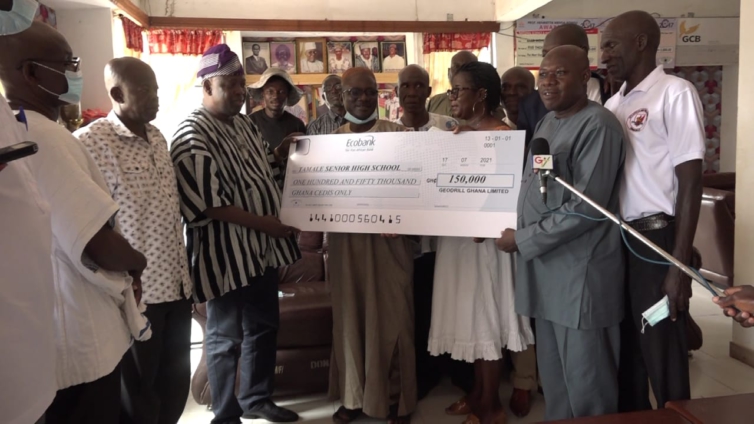 The 1983 year group of the old students of the Tamale Senior High School has presented a cheque of ¢150,000 to the school to support the construction of a Home Economics block for the school.

The donation by Geodrill was facilitated by one of the 1983 year group members, Dr Abdallah Ali-Nakyea, Director of Ali-Nakyea & Associates.

Presenting the cheque to the Head Master on behalf of the 1983 year group, the Sagnarigu Municipal Coordinator Al-Hassan Ziblim Alhassan said Tamasco has produced many resourceful people the school should be proud of their exploits.

He said the 1983 year group has led the procurement of resources for the development of several projects in the school, adding that the latest is the sponsorship funding for the construction of the home economic block.

Mr Alhassan Ziblim said when the school was said to have produced very resourceful people, he meant they didn’t have to produce the money among themselves but were able to source the money, adding that this time Geodrill Ghana Limited was the sponsor.

He said the group will form a committee to track the project and ensure value for money.

Rev. Edward Azika added that the school currently has almost 600 students pursuing the course, forcing them to conduct their practice in barges and over many days during exams.

Reverend Azika assured the group that they will police the constructor to ensure work is scheduled and properly done.

He appealed for more support for the inner furnishing of the block.