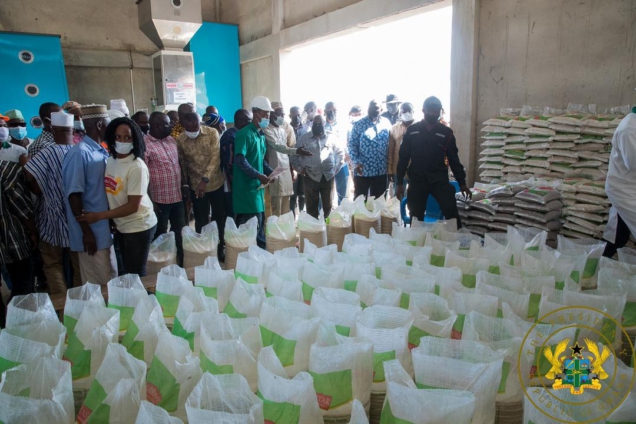 President Nana Akufo-Addo has expressed satisfaction with work so far undertaken on the construction of a ¢36 million watermelon juice factory, being established in Walewale in the North East Region.

Touring the facility on Tuesday, at the commencement of his two-day tour of the North East Region, the President visited Champion Foods and Beverages Limited, a wholly-owned Ghanaian beverage manufacturing, distribution and marketing company.

The President was informed that the company is employing the use of PET line technology, as compared to the Tetra Packs technology, and it is being financed with a facility from the Ghana EXIM Bank.

With minor construction works to be undertaken, President Akufo-Addo was informed that the overall project is 90% complete, with offices and staff accommodation at 80% completion, and plant, equipment, and machinery all on-site ready to be installed.

Full operationalization of the factory has been deferred to March 2022, with the company having installed a 10 metric tonnes per hour facility.

It is expected that, upon completion, the company will create direct employment opportunities for 300 Ghanaians and over 2,000 indirect workers, including farmers and aggregators, to be engaged in an out-grower scheme, covering parts of North East, Northern and other Regions of the country.

The President also visited Tamanaa Company Ltd., a rice farming and processing company located in Nasia near Walewale, which is also operating under Government’s 1-District-1-Factory initiative.

As a result of the support received from government, the company has been able to expand its operations, by adding a 250-metric ton per day rice milling facility, to its already existing 40 metric ton per day plant.

So far, some 148 workers have been employed, with the company generating a turnover of some $1.5 million annually. The company markets 60% of its rice as parboiled and the remaining 40% as non-parboiled under the brand name Nasia Star Rice.