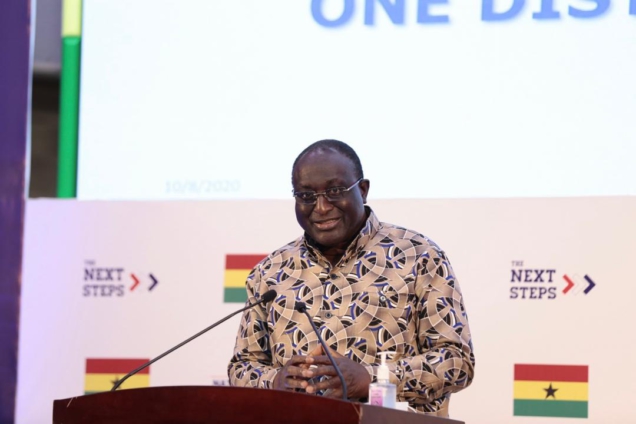 Government’s flagship programme, One District One Factory (1D1F), outperformed expectations in the short term as over 150,000 Ghanaians benefited from jobs created by 104 factories in its first five years of operation.

Ghana’s Trade Minister, Alan Kyerematen, under whose Ministry the policy operated, said this while explaining portions of the government’s mid-year budget in an interview last Friday on Asempa Radio.

Hon Kyerematen said that a healthy 58 state-of-the-art factories have been established to help reduce unemployment among the youth in the country.

On the Agricultural sector, Hon Kyerematen said the establishment of silos to store produce from farmlands will go a long way to minimise post-harvest losses and make food abundantly available throughout the year.

He added that “five Medium-Scale Agro-Processing factories have been established in Sefwi Akontombra, Nsuta, Savulugu, Dompim and Nkra Nkwanta”, aimed at boosting agribusiness and create more incomes for farmers.

Located in typical farming communities, these processing factories are will create direct and indirect jobs in the rural areas for the youth and help minimise the debilitating rural-urban migration.

On revenue mobilization, Ghana’s Trade and Industry Minister said the “government has mobilized GHC2.69 Billion for companies under 1D1F”.

He said the vehicle companies who are giants in the industry as “Volks Wagen, Nissan, Sinostruck and Toyota.”

On the payment of subsidy to support industry Hon Kyerematen said the “government has given interest subsidy support of GHC260.9 million to 3companies under 1D1F in the 134 districts that have benefited from the Project so far”.

Wrapping up on the beneficial impact of the 1D1F, the Trade Minister leaned on the Port Revenue incremental growth and the import duty exemption worth millions of Ghana Cedis.

Hon Kyerematen said government initiatives, such as the automized system of clearing goods at the ports, UNIPASS, has yielded enormous benefits as revenue at the ports increased by GHC 3.1 billion in its first months of operation even as companies under 1D1F have enjoyed import duty exemption worth GHC585 million.

During the phone-in session, Industry players in the raw materials sector heaped kind words on Hon Allan Kyerematen for his unique management of the 1D1F policy despite the recent influx of the post-COVID 19 effect on the economy.

DISCLAIMER: The Views, Comments, Opinions, Contributions and Statements made by Readers and Contributors on this platform do not necessarily represent the views or policy of Multimedia Group Limited.
Tags:
1 District 1 Factory
Alan Kyerematen
Job Creation