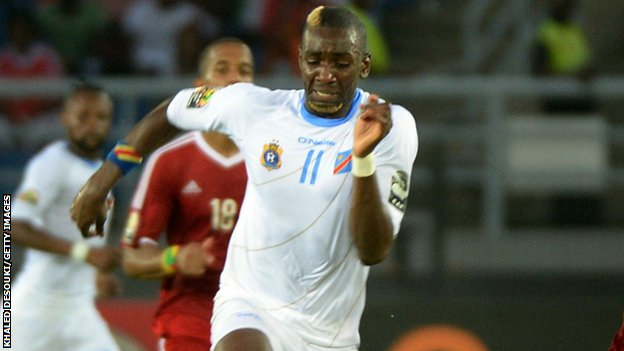 DR Congo, who held a 3-2 advantage from the first leg, went in front through Jordan N'kololo after 19 minutes, but an own goal from Dieumerci Mbokani made it 1-1 soon afterwards.

Bolasie scored from the spot with 13 minutes of the match remaining — but there was still time for Fiston Abdul Razak to score from the spot to reduce the aggregate deficit to just one goal.

Uganda produced a superb first-half performance as they beat Togo 3-0 at home to seal a place in the 2018 World Cup qualifying group stages.

The result, which gave Uganda a 4-0 aggregate win in the two-legged tie, was secured by the break.

Man of the match Farouq Miya, who had scored in the first leg, struck twice to add to an early opening goal by Geoffrey Massa.

Second-half goals by Lubambo Musonda and Winston Kalengo gave Zambia a 2-0 win at home to Sudan and wrapped up a 3-0 aggregate triumph.

After a first half in which Zambia had wasted openings, Musonda opened the scoring on the hour when he slotted the ball home after it had come back off the crossbar.

And victory was guaranteed with nine minutes remaining thanks to Kalenga's cool finish.

Morocco advanced despite losing 1-0 to Equatorial Guinea in Bata, a scoreline that gave the Moroccans a 2-1 aggregate win.

Igor Engonga made the breakthrough after a quarter of an hour, but the hosts were unable to find the vital second goal.

African sides must get through two-legged ties before reaching the group stage.