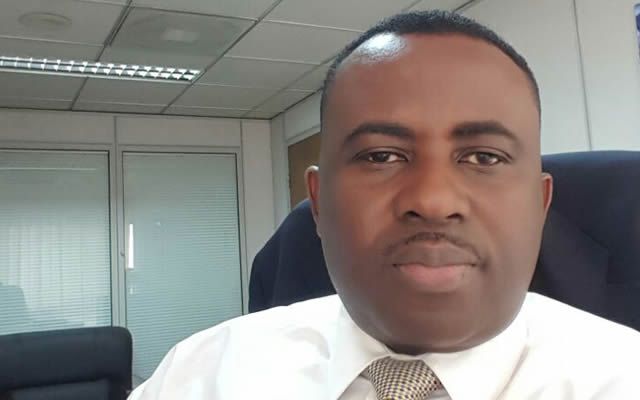 The Second Deputy Governor of the Bank of Ghana, Dr Johnson Asiama, has finally tendered in his resignation letter.

He held that position at the central bank over the past year.

In December of 2017, Joy Business broke the news about his resignation with follow-up indications by his lawyers on moves being made by Government to push him out of office.

Joy Business understands that the delay to exit has been driven more by behind-the-scenes negotiations between Dr Asiama, Bank of Ghana and the government.

When was this decision taken?

According to a letter intercepted by Joy Business, the decision to disengage from the Bank of Ghana happened some two weeks ago and a letter was finally tendered in last week Wednesday, December 27, 2017.

According to this letter, the President Akufo-Addo has been formally informed about this decision to resign with copies served to the Vice-President, the Governor of the Bank of Ghana, Dr Ernest Addison and Finance Minister Ken Ofori Atta.

Sources say the decision to move on was influenced by the progress made on his entitlements as Second deputy governor of the Bank of Ghana, which had delayed the submission of a letter confirming his resignation.  His resignation paves the way for President AddoAkuffo to propose a new person to fill the position.

It would be recalled that Joy Business in December 2017 reported that Dr Johnson Asiama had taken his accumulated leave leading to his resignation by the end December 2017.

Joy Business at that time also reported there has been an oral communication about his resignation, subject to meeting some conditions before that formal resignation letter is submitted.

Cost of Dr Asiama's exit  on the  public purse

Dr Johnson Asiama was left with two more years to the expiration of this contract at the Bank of Ghana. So this action would come at a cost to the state in terms of putting together a better package for him.

Analysts see this as worrying because he may be sitting at home doing nothing, whiles he continuous to take his salary, just like what was done in the case of Dr Nashiru Issahaku.  Those who are raising this argument are worried because, if a new second deputy governor is appointed today, that person would be taken her/his entitlements, whiles, Dr Asiama would still be paid.

Would this action have any impact on Bank of Ghana’s independence and market confidence?

Banking sector analysts and in particular a lot of the banking executives that we have sampled lately are of the deep view that the central bank is  “politicized”. At a time when the central bank is struggling to assert its independence, with the various banking laws and reforms, this action will once again be seen as an attempt by the politicians to interrupt the inbuilt institutional process. Let us examine how institutional changes have evolved over the past 10 years:

1. The current vice president was a Deputy Governor at the Central Bank. He stood on the ticket of the NPP as a vice presidential candidate and lost the election in 2008. He went back to post after losing the election. The NDC government upon assuming office paid him off and ‘kicked’ him out.

Amissah-Arthur was co-opted into the vice presidency, Wampah was kicked out for being firm on some critical issues including standing firm on limiting central bank financing of the budget and Nashiru also was kicked out after many issues.

3. Then comes Governor Addison who “pulls” along Deputy Governor Afari to work with him after serving together at the Research Department and working for Governor Paul Acquah. Now Johnson is being forced out and his replacement is highly likely to be politically tainted and with some strong political linkages, given the early indications of new that is emerging of who is likely to be named as the second deputy Governor.

The big question now is what would happen if there is a change of government in the next 4 or 8 years and what may happen to the current team. Will they also be forced out in a subtle manner and will the same pattern emerge and be followed through once again?

Who is Dr Johnson Asiama?

Dr Johnson Asiama was in April 2016 appointed Second Deputy Governor to replace, Dr Adul-NashiruIssahaku who was promoted to the position of Governor of Bank of Ghana. Until his appointment, Dr Asiamah was the Assistant Director at the Economics Department of the central bank, where he coordinated the work of the Monetary Policy Committee and supported the work of the Governors directly.

Dr. Asiama is an economist with an extensive working experience at the Bank of Ghana over the past twenty (20) years.

He was born on May 5, 1968, and joined the Bank of Ghana in 1996, where he rose through the ranks. He has served in various departments such as the Banking Supervision Department, the Financial Markets Department, the Research Department and the Governors Department.

He has published widely in journals in the area of monetary economics and economic growth and has a strong research interest in monetary policy modelling, economic stabilisation and long-term growth in developing countries.

He is also interested in issues about risk management in banks.

He has published widely in journals in the area of monetary economics and economic growth and has a strong research interest in monetary policy modelling, economic stabilization and long-term growth in developing countries