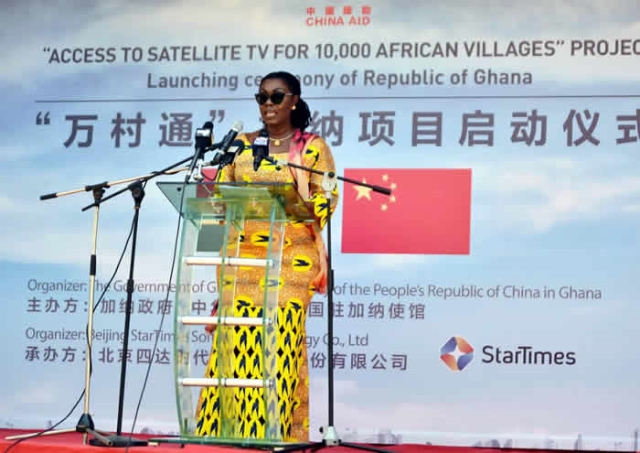 The Ministry of Communication, in collaboration with StarTimes, a Chinese multinational media company, on Wednesday, launched a 300-village access to satellite television (TV) project to provide needy communities with digital electronic gadgets.

The project, launched with the aid of the Chinese Government, seeks to provide free solar-powered digital TV receiving systems, decoders and projectors, as well as solar lights for 900 locations within 300 communities across the country.

Minister of Communications, Ursula Owusu Ekuful, said the transfer of technology and knowledge across borders, as a result of globalisation, was helping to boost innovation and productivity, whilst increasing global interdependence and strengthening global cooperation.

She said the emergence of the Information and Knowledge Society and its power to gather, process, store, retrieve and transmit knowledge and information created a range of opportunities to accelerate the development of rural, un-served and underserved communities.

Satellite TV, she said, therefore, had the potential to introduce an array of educative, informative and entertainment channels and programming to the beneficiary communities.

Mrs Ekuful said: “For Government, television remains an important platform for communicating and disseminating vital information to the general public, predominantly through the news and public sensitisation campaigns”.

She commended the Chinese Government for the initiative, saying that, in the digital broadcasting environment, the proliferation of satellite TV across the country would offer an opportunity for local and international content providers to develop exciting, relevant and quality programming that would appeal to a range of audiences.

Mr Felix Ahonzo, Chief Operating Officer (COO) of StarTimes Ghana, said the opportunity accorded the Company an invaluable opportunity to ensure that the African continent and media development progressed to the next level in digital television broadcasting.

They form part of the 10,000 communities that were selected to benefit from the project in 25 African countries.

“Each community will receive 20 decoders with dishes and accessories installed in selected individual homes, 2 projectors TVs and a StarTimes TV with backup solar light installed at the public viewing and recreational centres,” he explained.

He said the Company worked with districts and regional representatives across the country to identify the communities, explaining that key considerations for the selection included access or availability of public places (community halls, schools, hospitals, etc.) which could guarantee the safety of the installed devices.

Mr Ahonzo said a total of 20 channels with predominantly African content, which included news, music, and Ghanaian movies, would be available to the beneficiaries.

For six months, some selected households would not pay for the broadcast, however, it would be perpetually free at all public viewing places.

“In addition, Startimes will be responsible for the maintenance and repairs of the devices for five years. They would be installed at no cost.

Startimes would, consequently, train 600 ambassadors; two people each in the communities for the installation and maintenance of the devices.

He reiterated China’s goodwill and commitment to support Africa’s development.

Mr Shi announced that China would launch eight major initiatives in close collaboration with African countries, including Ghana, in the next three years and beyond

He emphasised that to make sure these initiatives were implemented, China would extend $60 billion of financing to Africa in the form of government assistance, investments and financing.