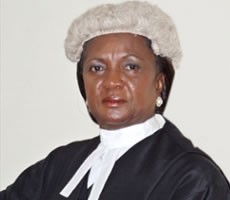 The 3,000 constituents in the Kasena Nankana District who the Human Rights Court ordered to be registered so that they might take part in the upcoming elections will not be able to vote on Friday.

This is because Regulation 9 (5) of CI 72, which deals with an individual’s right to register and vote, prohibits the Electoral Commission (EC) from including in the voters’ register the names of persons who qualify to register as voters but fail to do so sixty days or more before an election.

The issue came up recently when a five-member delegation of African Union (AU) and ECOWAS personnel, led by Nigerian ex-President General Olusegun Obasanjo and part of the organizations’ joint Election Observer Mission, paid a visit to Chief Justice Georgina Wood at her Accra office.

The delegation is in the country to observe Friday’s general elections.

The meeting between the Chief Justice and the group offered them the opportunity to learn at first hand about the measures being put in place by the judiciary to resolve electoral disputes should they arise.

During the discussion, ECOWAS Director of Political Affairs Musa Fatau asked whether the 3000 unregistered voters could be added to the main register in time and whether the drama would pose a problem to the whole electoral process.

Chief Justice Wood said that the 3,000 people cannot vote and that if they were allowed to, somebody could challenge that action in court.

Supreme Court Justice Sule Gbadegbe, who also commented on the issue, said that even if the 3,000 people were registered by the EC, they still could not vote because they would be registering fewer than 60 days before the election.

He said that education on this aspect of the law could increase public awareness of how to register and qualify to exercise one’s franchise during elections.