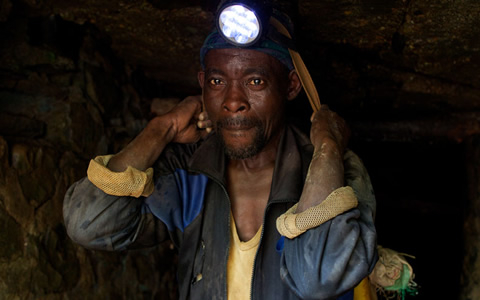 The Ghana Mineworkers Union has said between January 2013 and March 2014 it lost 3,080 members, or 16.1 percent of its membership, through retrenchment blamed on the slump in the price of gold.

The union said it is worried that redundancy is always considered the major option to manage financial and operational crises within the industry, and challenged the moral and ethical business conscience of mining companies using the falling gold price to create a major source of job insecurity.

As the industry considers more job-cuts to streamline costs, the union fears its membership will further shrink.

Newmont Ghana has said it will be terminating the employment of an additional 500 to 600 miners, after laying-off 300 last year. AngloGold Ashanti's (AGA) Obuasi Mine, which last year retrenched 430 workers, is expected to send home an extra 400 this year.

“It has almost become a ritual that the primary cost driver that companies manipulate in critical financial times is labour cost, particularly lower-level jobs. This is indeed worrying for us; that the falling price of gold has became a major source of job-insecurity for our members,” said Eric Kwabena Gyima, Deputy General Secretary of the union at a policy dialogue in Accra on the Economy-Wide Consequences of Ghana's Dependence on Minerals.

It was organised by Third World Network-Africa, the research and advocacy organisation that has been championing a new vision for the mining industry on the continent.

Mr. Gyima — who presented a paper on the topic “In the Wake of the Falling Gold Price, How Can Unions Address the Challenges Facing Them While Linking up More Effectively with Other Groups on the Agenda for Change” — said job losses have worsened the already precarious unemployment situation the country is battling with, and its attendant social cost.

The gloomy picture is that some of the redundant workers apply their skills and experiences to aid in illegal mining activities.

“Job losses adversely affect collective bargaining in the sense that, they limit the ability of the mining companies to accede to the legitimate demands of the union to improve the working and living standards of mine workers, who are constantly exposed to the harsh conditions associated with activities of the industry,” Mr. Gyima said.

Making a proposal to address some of the challenges, he said labour relations in the industry need a complete transformation whereby employers will no longer view labour as a cost and expense to manage, but a key asset to invest in and motivate.

He said labour relations should address key issues such as labour productivity and rewards, as well as cost management.

“The industry should develop an effective employee engagement strategy as a major component of the industry's business plans to ensure that employees are aligned with these plans. This strategy should be shared with employees to foster ownership. In this regard, the union is prepared and willing to partner the industry in developing such strategies.”

Benjamin Aryee, Chief Executive Officer of the Minerals Commission, said government and other stakeholders need to design a clearer vision about how the country benefits from minerals.

“It is important that our political leaders take time to understand what is happening globally,” he stated, advocating a diversification strategy to avoid over-dependence on gold as the major export commodity of the country.