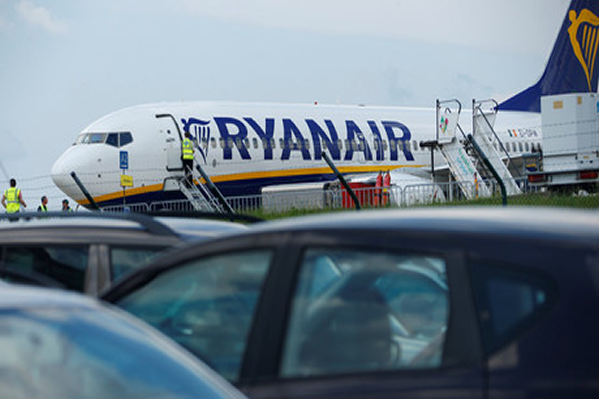 Over 30 passengers were hospitalized, with some complaining about bleeding from their ears, after a Ryanair flight plummeted 28,000 feet in less than 10 minutes on Friday, according to authorities and flight tracking software.

“I can safely say it was the most terrifying thing I ever experienced,” passenger Roxanne Brownlee told ABC News.

A spokesperson from Ryanair said an “inflight depressurization” on the plane, which was carrying 189 people, from Dublin, Ireland, to Zadar, Croatia, caused oxygen masks to deploy. The plane made an emergency landing at Frankfurt-Hahn Airport in Germany.

Amazing video from Mr. Kevin Burke. You can see how terrified we were. No-one speaking, no-one moving. Silence and just silence.#Ryanair #nightmare

“The oxygen masks just fell down in front of us — we were given no context, there was no announcement,” said Brownlee. “We were all kind of scrambling trying to put the oxygen masks on and people were screaming, crying and shouting.”

When the plane began to plummet, Brownlee and another passenger, Sara Sihelnik, said they had no updates from the hostesses or captain.

“It was that moment we were plummeting that we were thinking, ‘This is it, we’re going to die,’” said Brownlee.

Once the plane arrived at the airport, 33 people were taken to the hospital “to be treated for headaches and earaches and nausea,” according to authorities. Sky News reported that some people complained they were bleeding from their ears.

A picture from one of the passengers of the flight FR7312, from Dublin to Zadar. She cannot fly due her injuries. We are still in the Frankfurt-Hahn. No information, no alternatives, no place to rest.#Ryanair#nightmare@Ryanair

Brownlee and Sihelnik described the treatment they received after landing as “disgraceful.”

“They brought in about 100 burgers, for 189 of us there. They said elderly and families with small children can sleep on cots in the basement, the rest of us was just sort of left floating around,” said Brownlee. “So we were all awake upwards of 36 hours of the entire ordeal — just completely exhausted, shattered and I would just say shocked with the treatment that we received from Ryanair.”

Courtesy of FlightRadar24.com
The flight path shows the plane falling thousands of feet in altitude.

According to a Ryanair spokesperson, “Customers were provided with refreshment vouchers and hotel accommodation was authorised, however there was a shortage of available accommodation.”

On Saturday, another Ryanair flight took a majority of the passengers to their destination in Croatia. Out of the 33 people admitted to the hospital, 22 were released and bused to Croatia because they were told not to fly.