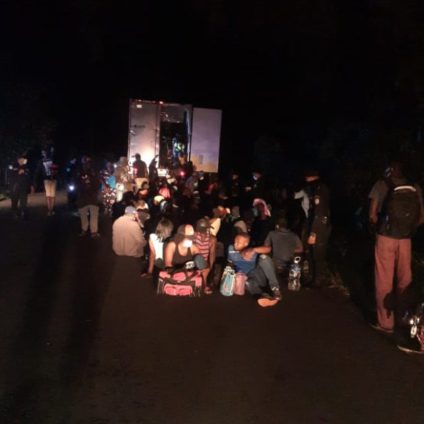 The Guatemala police in Central America has confirmed that nine Ghanaians were part of the 126 illegal migrants abandoned in a shipping container by some suspected human traffickers.

In a tweet on Saturday, October 9, the police said they acted after a complaint reported an abandoned trailer with people screaming emanating from it.

“Shouts and blows were heard coming from the container; inside it were 126 undocumented people. 109 from Haiti, 11 from Nepal and 9 from Ghana.

“Humanitarian assistance was provided, and then they were transferred to the shelters of the Guatemalan Migration Institute,” a translation of their post read.

The Police said they suspect the group had been abandoned by human smugglers at the 114-kilometre route that leads from Cocales to Nueva Concepción.

According to the police, the migrants were loaded in a header C-193BVB, hooked to the TC007CBH van.

And they believed that the group was being moved through Guatemala to Mexico en route to the United States.

A spokeswoman for the country’s migration body said they believed that the migrants had entered Guatemala from Honduras and will subsequently be returned to authorities in the neighbouring country.

The BBC quoted a police spokesperson saying: “We heard cries and knocks coming from inside the container. We opened the doors and found 126 undocumented people.”

A wave of air travels to southern America was recently reported in some communities in parts of Accra.

Most of the people who were travelling to Brazil, according to reports, were aiming to make an onward journey by road from Brazil to the United States.

It is not the first time that Africans, in general, have been reported to have attempted to go through southern America with an eye on entering the US via its southern borders.