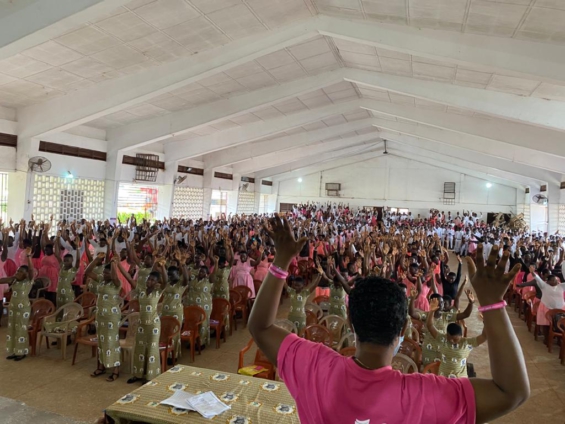 The Ezekiel Ansah Foundation (EAF) has always looked to impact our society. For the first 4 years of EAF’s existence, the focus has been to reach out and impact the youth of Ghana in the area of sports, education and health.

The founder and Leader, Ezekiel Nana Ansah, a seasoned NFL campaigner is an ambassador of Breast Cancer awareness. For two years running, he has actively participated in Breast Cancer Awareness campaign in conjunction with the NFL.

The foundation, therefore arrived at the decision to educate and provide free screening on breast care within Akuapeman in the Eastern Region and some parts of Adentan in the Greater Accra region of Ghana.

This novel operation required planning and implementation of ways to achieve educating of over two million people and providing free screening to about two thousand people predominately within the Akropong and Adentan Housing Down municipalities.

The founder and leader, Ezekiel Nana Ansah represents the hope and bright abilities of the Ghanaian youth. His commitment to his society is a reflection of his appreciation on how his family and loved ones helped prepare him for greatness. As a young Ghanaian with the dint of hard work, he chased his dream and not only learned, but mastered the game of American Football by playing in the National Football League (NFL). He will recount that his failed attempt to get onto the Brigham Young University (BYU) basketball team during his first year didn’t mean the end of the road.

The decision to try out the football team may have appeared absurd for an African who had never played this game, but as fate would have it, he was on a rare path of achieving the pinnacle of the sport; to be drafted as the 5th overall pick at the start of the 2013 season by the Detroit Lions. This began his professional career as a defensive end player in the NFL.

He didn’t only get picked. He continued to give his best which allowed him to be selected onto the NFL all-star team in 2016. He played with the Lions for 5 seasons, joined the Seattle Seahawks at the beginning of the 2019 season and currently playing for the San Francisco 49ers.

Ziggy, as he his affectionately known in the NFL, believes he has a responsibility to help empower the youth and the good people of Ghana to chase their dreams. As a seasoned athlete he appreciates the value of being in good health and the impact that it can lend to chasing your dreams, both on and off the field.

Consequently on the 1st of October 2020, Ezekiel Ansah Foundation (EAF) launched its month long breast cancer awareness campaign with a ceremony at the forecourts of the Omanhene’s Palace at the heart of Akropong. The essence of the ceremony was to inform the people of Akropong and its environs of the need to open themselves up for education on breast care and the practical maneuverings of a breast self-exam.

The Member of Parliament for Akuapem North, in whose territory the programme was held, encouraged the women of Akropong to take advantage of the programme and undertake a clinical examination of their breast. Nana Ama Dokua Asiamah Adjei also encouraged healthy living and eating natural organic food coupled with the regular breast examination to help save more lives. The Omanhene of Okuapeman traditional Area, Oseadeeyo Nana Akuffo Ababio II, was ably represented by his chief of Staff George Addo-Yobo.

Also present to add to the awareness was the District Commander of Police for Akuapem North, Superintendent Steve Tetteh. The resource person for the day, Doctor Charles Arhinful, Head Surgeon at the VRA Hospital, emphasized the need to visit a health facility at least once every year to undertake extensive examination of the breast.

This improves every one’s chance of survival should there be any cause for medical attention because early detection, he emphasized, saves lives. The chair person for the occasion, Dr. Mrs. Faustina H. Blankson, Lecturer of Health Education at the school of Public Health, passionately advocated that we hold dear our healthy organic foods as healthy eating and living was a sure way to help prevent diseases in its entirety.

The launch was immediately followed with the free medical screening that ran for 3 days at the forecourts of the Akropong Palace. The people of Amanokrom opened themselves up to the exercise and impressed on EAF to replicate the clinical breast screening within their town. EAF gladly obliged and on the 3rd of October ran a free clinical breast screening side by side at Akropong and Amanokrom. Over 500 men and women opened themselves up to be screened by medical officers from VRA Hospital and the Akuapem North medical center.

Before the commencement of the month long Breast cancer awareness, Dr. Arhinful spearheaded a training programme for a group of nurses and resource people. It was hosted and organized by the Akuapem North medical center on the 24th of September 2020. A potent team was formed on this day and through the month of October executed the task at hand with alacrity.

On Friday 16th of October, it was the turn of the market women at the Adentan Housing down Shopping Mall to receive education on breast care and to undertake free breast screening. A team of Medical experts from the Korle-Bu Breast Care Unit led by Babara Adu, by demonstration taught the women how to properly perform a self-breast exam.

The breast cancer awareness programme targeted at Akuapeman would not have been complete if the education of our future leaders was left out. Three senior High Schools within Akuapeman took their turns to receive extensive education on self-breast examination. First to take their turn was the Presbyterian Senior High Technical School on Saturday 17th of October.

Having only recently returned to school due to COVID 19, about one thousand students were enlightened by the need to self-examine their breast once a month to achieve early detection and save their lives. Okuapeman Senior High followed on Sunday the 18th of October. The young lads and pride of Akuapeman who believe themselves to be ‘Always First’ filled their assembly Hall and the over one thousand five hundred second year students were glad to have been educated by a group of trained nurses of which the main facilitator Sika Ansah was a former student of Okuapeman Senior High School.

About four hundred students of the Ark Mount Sinai secondary school took their turn on Tuesday 20th of October to complete the programme of providing education to a section of the youths within Akuapeman.

Social media was not left as a medium to reach out with breast care education. EAF’s social media handles buzzed with information and eye catching graphics; all to emphasize the need for all to self-examine their breast once a month and visit the hospital once a year for clinical examination.

Ezekiel Ansah Foundation expressed its gratitude to the complex mesh of people and places that came together beautifully to make the month of October a fulfilling month of Breast care awareness.

DISCLAIMER: The Views, Comments, Opinions, Contributions and Statements made by Readers and Contributors on this platform do not necessarily represent the views or policy of Multimedia Group Limited.
Tags:
Breast cancer
Ezekiel Ansah Foundation