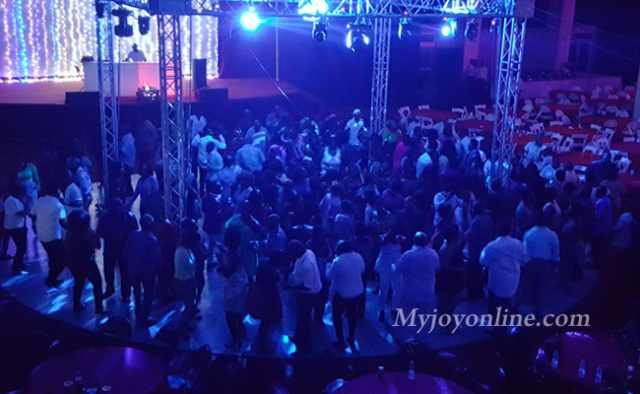 Every inch of space at the Banquet Hall of the State House was on Sunday night filled with lovers of the popular 1970s and 1980s old school jams.

In their numbers, they thronged the venue for a night well-crafted to enable them relive their disco days and truly they left fulfilled.

The 2015 Joy FM Keteke Fever was truly an experience many of the country’s CEOs, businessmen, politicians who were in attendance will attest that they indeed relived their glorious old days – they reminisced those days and also cap the year.

The event, has over the years, been the only party, which teleports participants back to the golden era of the ‘70s and ‘80s through classic music, dance, fashion and unadulterated entertainment.

In a well-designed set up, which had enough space for dancing, patrons danced the night away to great tunes churned out by Andy Dosty and Beelei.

The two DJs on the night dished out several classic tunes such as Marcia Griffiths’ ‘Electric Boogie (The Electric Slide)’, The Staple Singers’ ‘I'll Take You There’, ‘Bustin' Loose’ by Chuck Brown & The Soul Searchers, McFadden & Whitehead’s ‘Ain't No Stopping Us Now’ and Teddy Pendergrass’ ‘When Somebody Loves You Back’.

Ghanaian classics from artistes, Osibisa, Amakye Dede, Pat Thomas and a host of others were not left out. The classic era of Balm Tavern, Keteke and Picolo Mondo came alive again.

As the songs oozed out of the speakers, the dance moves came in different shapes, sizes and formats but prominent among them was the Electric Boogie (The Electric Slide) as patrons slid in admirable fashion.

The 2015 edition of the Joy FM Keteke Fever kicked off shortly after 8pm Sunday and cruised on until after 3am Monday. There were free drinks on the house accompanied with free pepper soup.

Patrons, from the bright smiles on their faces, left the venue truly fulfilled.