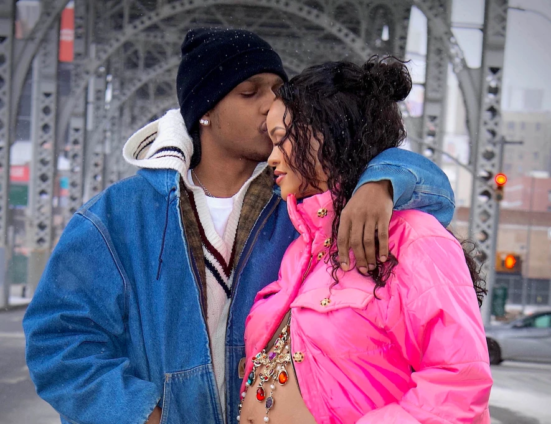 On Wednesday, the 33-year-old rapper teased the drop on social media with a teaser featuring video clips of him and the 34-year-old FENTY founder.

The cover image for the record is an illustration reminiscent of a movie poster that shows scenes from the music video that fans will remember seeing the duo film during a multi-day shoot in New York City’s Bronx neighbourhood last summer.

A source told ET that the video shoot involved “a ton” of outfit changes for Rihanna and that the pair was “very lovey-dovey” between takes.

“I think fans are going to love this new video and this song,” the source added. “It’s going to be like getting a glimpse into their relationship.”

The video is an ode to the classic love story with a “ghetto love tale” twist as Rocky and Rihanna play true ride-or-die characters in a devoted relationship despite their circumstances. At the end of the video, after all their trials and tribulations, the couple gets married while wearing marital-inspired grills. Rocky’s grills say “Marry Me?” and Rihanna’s grills say “I do.”

Much like what fans caught in the paparazzi photos, Rihanna rocks several outfits throughout the video, including a yellow-printed headscarf, corset top, brown pants, heels, and a heavy fleece-lined overcoat, while A$AP goes all-black with a gold belt and trucker hat.

The singer is also seen in a pink neon fur coat and lime green heels and A$AP wears a matching lime green fur hat with a tank top, jeans, and boots.

The rapper took to social media to celebrate the single’s release, writing, “D.M.B. OUT NOW!!! THANK$ 2 ALL INVOLVED WHO HELPED & SPECIAL THANK$ 2 MY LADY FOR THE MOTIVATION & ROLE https://asaprocky.lnk.to/DMB“