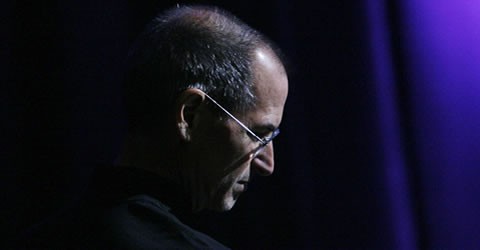 The writer said he intended to write just three scenes for the movie, each set backstage immediately before a product launch.

He said that every half hour that passed in the on-screen characters’ lives would last 30 minutes of the audience’s time.

Two days later it emerged that Sony Pictures had bought the rights to his authorised biography ahead of its release. Movie site Deadline – which broke the news – said it had paid between $1m to $3m (£630,000 to £1.9m).

Mr Sorkin had already written The Social Network for the studio – the adaptation of an unauthorised account of Facebook founder Mark Zuckerberg’s rise – making him a natural choice for the project.

However, rather than depend on Walter Isaacson’s book it has emerged that Mr Sorkin is basing his treatment on his own research.

“I’m meeting with all the people in Steve’s life now, from [Apple co-founder] Wozniak to all the people who were around for the Macintosh,” Mr Sorkin said in a video posted online by The Daily Beast news site.

Mr Sorkin added that his plan was to focus on the minutes leading up to the launch of a Macintosh computer; an event during Mr Job’s time at Next Computer – possibly 1998’s launch of the system in San Francisco; and the unveiling of an iPod.

He said he did not plan any “time-cuts”, preferring not to break away from the launch event preparations to flashbacks of other events.

However, he did signal there would be one further element at the end of the film: a version of Apple’s first Think Different television advert.

“If I can end the movie with that text, with that voiceover – ‘here’s to the crazy ones’ – if I can earn that ending then I’ll have written the movie I want to write,” Mr Sorkin said.

Mr Sorkin’s approach is radically different to the biography Sony paid for, which gives a much broader overview of Mr Job’s life and does not spotlight the minutes leading up to the three launches.

Another unauthorised movie starring Ashton Kuchter is also being made by an independent studio offering a broader take on Mr Jobs’ life – a format audiences are more used to.

Despite this Ian Freer, assistant editor of movie magazine Empire, said he was excited by Mr Sorkin’s approach.

“It does make it an exciting proposition,” he told the BBC.

“It would have been very easy to have just trotted out the beats in his life, but this seems a very challenging, novel approach.”
Bill Gates cameo?

But not everyone is as positive.

Some members of the Macrumors site have expressed concern that the suggested format would miss the opportunity to show Mr Jobs interacting with his rival Bill Gates – a tense relationship which was previously the focus of the television movie Pirates of Silicon Valley.

However, there is still the possibility that their wish will be granted if Mr Sorkin decides to focus on the Macs launched at one of Mr Jobs’s keynote appearances in 1997.

Mr Gates took part in the press conference, appearing via a video link to announce that Microsoft was taking a stake in its rival.

However, bearing in mind Mr Sorkin referred to the launch of “the Mac”, it is more probable that he is referring to 1984’s unveiling of the computer.