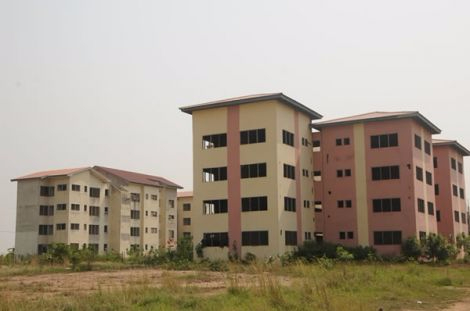 The government, with support from some local banks, has set aside more than $50 million to complete some abandoned housing projects in the country, the Deputy Minister of Works and Housing, Freda Prempah has said.

This follows several criticisms by a section of the public that successive governments normally abandon projects started by its predecessors.

“The Kumasi one is about 90% complete and we’ve put together some local banks that are going to support us to finish that of WA, Tamale and Koforidua to the tune of about $51million so we’ve worked behind the scenes before coming out,” she said.

Madam Prempeh disclosed this in an interview at a Joint venture agreement between two private firms HS Kodana Co. Ltd. and Turkish developer, Sidre EPCM to support the government to roll out about 100,000 affordable housing units in the country.

HS Kodana Company Ltd. is to construct a minimum of 100,000 housing units in the next 48 month (4 years) across all the sixteen regions of Ghana.

The Ministry in collaboration with all the stakeholders will allocate the required project sites for these projects to be undertaken. The private firm has agreed to commence with at least 25,000 housing units.

The Ministry of Works and Housing is in consultation with the Ministry of Finance to issue the requisite guarantee of international consequence via a bank or any financial institution agreeable to all stakeholders relating to each year’s deliverables of the housing units to be constructed by HS Kodana. This is to make sure that investors feel secure of their investment.

The President of Turkish firm Sidre EPCM, Muslum Dindar, pledged commitment to engage more locals in the construction process so as to create jobs in the country.

President Akufo-Addo in this year’s State of the Nation Address said this year’s budget made provisions for the construction of 200,000 units, and a database of local and foreign developers have been created to help make the policy a reality.

The government continues to adopt several measures to bridge the current housing gap which stands at over 1.7 million units.