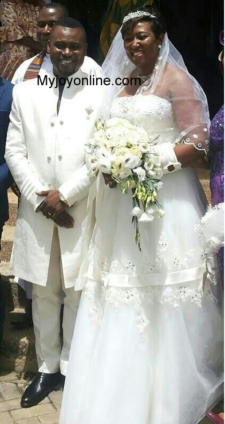 The host of Okay FM’s late afternoon show Ekwanso Dwodwoo, tied the knot with with Genevieve at the Emmanuel Methodist Chapel at East Airport, Accra.

The event was attended by dozens of media practitioners, close relations as well as some celebrities including actress Selassie Ibrahim.

It is the second time the ace presenter has had to choose a life partner after his marriage to Margaret fell on the rocks. Abeiku Santana and Genevieve are said to have been pals for over 13 years.

Last February, the two went through a traditional marriage ceremony and decided to top it with a wedding today.

“I have known Gene in Kumasi since 2001 before coming to Accra where I met and married Maggie, my ex. As God’s ways are not our ways and luck being on my side, Gene was still single so I took that bold step, proposed and she accepted,” Santana told Showbiz in an interview recently.

He described her lost-and-found love as an ideal African woman who is “not artificial, someone who projects African beauty and portrays African values, a lady who knows how to appreciate her man in every way“, he said.