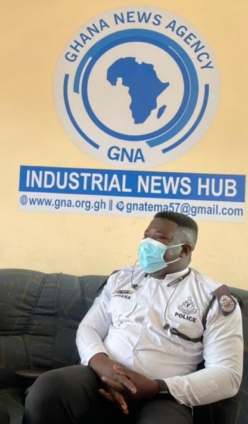 The absence of road markings or zebra crossing points on various roads has been classified as a major contributor to road fatalities.

“The MTTD have identified about 58 pedestrian crossings that have no markings or where there are, it had faded due to the rains and other human activities,” Sergeant Richard Timinka, has stated in Tema.

He said areas without markings including Community eight (C8) resulted in the knocking down of 11 people.

The GNA-Tema and MTTD Road Safety Project seek to create consistent and systematic weekly awareness advocacy on the need to be cautious on the road, educate all road users of their respective responsibilities, and sensitize drivers on road safety regulations, rules and laws.

He, therefore, called on Road management authorities to urgently repair the faded road markings in Tema, stressing “there are schools close to some of the highways and the absence or faded road markings or zebra crossing points make it difficult for children to cross the road.

He cited where an eleven-year-old boy was knocked down at Community Eight last month due to the poor zebra markings and also appealed to road users to be cautious and protect pedestrians.

Sgt. Timinka also called for the installation of Automatic Traffic Lights on highways near schools to aid the students and pupils who would press and cross the road.

He said where there were no zebra crossings on highways and dual carriageways drivers who felt the need to stop for the pedestrians to cross sometimes endangered their lives and other road users especially when enough signals were not given to inner lane cars or signaled to stop.

Sgt. Timinka said because there were no road markings, most drivers failed to slow down or even stop for pedestrians, and expressed concern about pupils who cross the busy road daily to and from school.

The MTTD Officer warned against inattentiveness on the road either by pedestrians or drivers, which was another cause of accidents saying, that people go to the extent of responding to mobile phone messages while crossing, while some receive calls and others put other devices in their ears to listen to music.