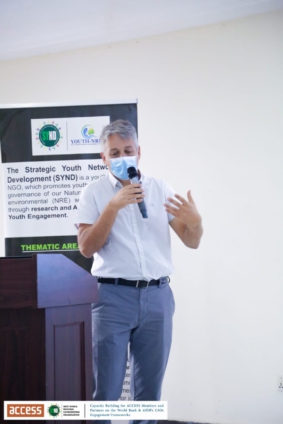 The workshop that commenced on Thursday, August 12, saw the likes of Dr David Vilar Ferrenbach, a Senior Energy Specialist at the World Bank.

In his presentation on the Multi-Tier Framework (MTF) that helps to understand the current status of access to electricity service, Dr David Vilar Ferrenbach noted that Ghana has improved its electricity access rate since 2010.

Speaking at the workshop in Accra on Friday, August 13, he, however, stated that about 5 million Ghanaians as of 2019, do not have access to electricity.

He based his submissions on the World Bank’s Tracking SDG7: 2021 Energy Progress Report.

The report further reveals that Sub-Saharan Africa has the highest share of renewables in energy supply due to large reliance on traditional uses of biomass.

Due to the Akosombo Dam, the country has made strides with respect to renewable energy, but this has declined over time.

As to why Sub-Saharan Africa has been unable to make substantial growth, Dr David Vilar Ferrenbach explained that, unlike Asia, some African countries lack political stability, proper planning framework, huge investment and have a larger population as to its resources.

The CPF, he said reported that “Ghana has been among the fastest-growing economies in Africa since 2017 and at the forefront of poverty reduction.”

Although the year 2020 was challenging, he added that “growth prospects are positive beyond 2020. The economy is expected to rebound in 2021 as the pandemic subsides and demand recovers domestically and abroad.”

“On average, the output is expected to grow by 4.5% yearly over 2021- 2023, driven by mining and oil production, and the impulse provided by the Ghana CARES program.”

In an interview with Myjoyonline on the sidelines of the two-day workshop in Accra, the Executive Director of Strategic Youth Network for Development, Chibeze Ezekiel, disclosed that the Country Partnership Framework between the government and World Bank, a six-year programme to determine the support government will receive is still being developed.

For him, works with the World Bank “will help to reduce renewable energy challenges, in terms of accessibility, affordability, reliability and also clean energy.”

He added that “we have to push government to provide the resources to do what it committed to. So far, we are less than 1 per cent when it comes to renewable energy. We are hoping to do 10 per cent by 2030.”

According to him, the moratorium introduced by government would make it difficult for new renewable energy to be created.

He, however, advised government to be very committed, and do what it says.

“They have given licenses to many companies. About 90 or so and about 11 are operational. It means that the Energy Commission did not do due diligence. Before you give license, government must be sure the company can deliver because you can’t go to the global platform and make pledges and come back home and not put in the measures to help us attain those commitments.”

Chibeze Ezekiel is insistent that “renewable energy is the way to go” adding that “it is a huge arena for creating employment.”

The renewable energy masterplan projects that by 2030, some 220,000 jobs would have been created along the value chains.

Some participants from the government and assembly level who also spoke to Myjoyonline.com said they were thrilled about the commitment to improve renewable energy reach.

Assistant Development Planning Officer at the Ga East Assembly, Juliet Akor-Boafo said “we work on ways to improve climate change. We plan on inviting SYND into the assembly to build the capacity of other staff not present today.”

Also in attendance were representatives from other assemblies including Ayawaso West and Communications Officer of World Bank Ghana Office, Kennedy Fosu.