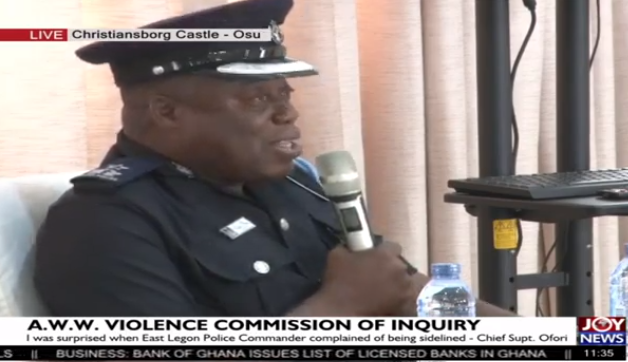 Operational director, Greater Accra police, told the Short Commission Thursday his outfit has no written “after action report” on the security situation of the recent Ayawaso by-election.

According to Chief Superintendent of Police, Kwesi Ofori, he gave his account through Police radio communication to those who matter.

The Ayawaso by-election, which was under the supervision of the Greater Accra Police Command, turned violent following a standoff between some supporters of the National Democratic Congress and men, who have been claimed to be national security operatives by the National Security Coordinator, Mr. Albert Kan Dapaah.

Among other things, the Emile Short Commission has been tasked by the President to make a full, faithful and impartial inquiry into the circumstances of, and establish the facts leading to, the violence that left an unremovable stain on the Ayawaso West Wuogon by-election on the 31st day of January.

But explaining how the radio report was done on Election Day, DSP Ofori said police used a communication network device known as Gotta.

According to him, this device had about 46 police officers plus the Greater Accra Regional Police Commander, his deputy and any Regional officer, who wanted to monitor development on the election day.

DSP Ofori added that the taking over of investigations by the police administration did not encourage him to do a written report.

“We did not want to write anything that might mar investigations. Personally, I am waiting that when I am called upon by the investigation, I will give my testimony,” he told the Commission.

DISCLAIMER: The Views, Comments, Opinions, Contributions and Statements made by Readers and Contributors on this platform do not necessarily represent the views or policy of Multimedia Group Limited.
Tags:
ACP Kwesi Ofori
Emile Short Commission