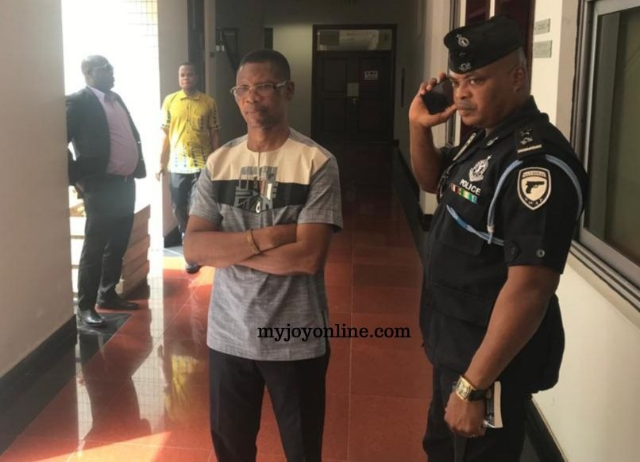 Assistant Commissioner of Police (ACP) Dr Benjamin Agordzo has been granted a self recognisance bail to the tune of ¢500,000 by the Accra High Court pending a trial.

The Court presided over by Justice Charles Ekow Baiden on Tuesday ordered the embattled police chief to submit his passport to the Court Registrar.

The coup suspect has been denied bail more than twice the Court following opposition by state prosecutors to an application for bail filed by his lawyers.

Senior State Attorney Hilda Craig the Court that the senior police officer wields influence and power within the police service and would interfere with ongoing investigations if he’s granted bail.

She added that the witnesses from the Director of Bureau of National Investigations (BNI), National Security and the Police Service who will testify against him could be compromised, once the senior police officer is released on bail.

In a swift reply, Mr Kpebu told the court that the denial of the ACP Agordzo’s personal liberty constitutes serious violations of “his priceless human rights and hence should be granted bail.”

But on Tuesday morning, after granting him bail with eight sureties, Justice Baiden also required of him to present himself to the Inspector General of Police (IGP) and BNI in line with a schedule provided by the court.

The senior police officer and 10 other persons are standing trial after being accused of involvement in a plan to topple the government.

They said he is eager to see the commencement of trial to clear his name of all charges levelled against him.

DISCLAIMER: The Views, Comments, Opinions, Contributions and Statements made by Readers and Contributors on this platform do not necessarily represent the views or policy of Multimedia Group Limited.
Tags:
Benjamin Agordzo