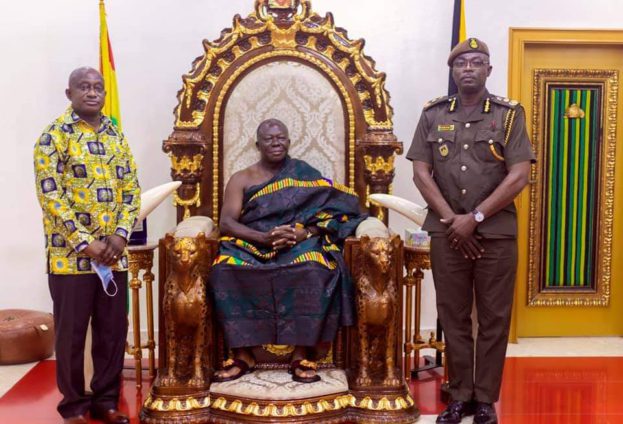 The Acting Director-General of prisons (DGP), Isaac Kofi Egyir, on Friday paid a courtesy call on the Asantehene, Otumfuo Osei Tutu II, at the Manhyia Palace.

The visit was to allow him to discuss issues of interest as far as the running of the prisons in the region, in particular, was concerned.

The Manhyia Local Prison is historically the oldest in the country, predating the colonial era, hence its special recognition in the annals of Prisons administration.

Mr Egyir said he deemed it prudent, upon assumption of office as the Ag. Director-General of Prisons, to call on the Otumfuo to pay homage as he sees the Asante overlord as a father for all.

He further acknowledged that the Asante kingdom bears most of the prisons’ agricultural lands and therefore serves as the food basket of the Service.

The Ag. DGP extended the appreciation of the Prisons Service for all the support the Otumfuo has given to the Service over the years.

On his part, Otumfuo reminded the Ag DGP that Ghanaians are still looking up to the prisons to churn out reformed ex-convicts who will contribute to national development after their incarceration.

He, however, expressed his optimism that the Ag. DGP, Isaac Kofi Egyir, will succeed in his tenure as the head of the Prisons Service, given his rich background and humility.

He advised that he should continue to work in harmony with all his colleagues to ensure that they collectively succeed in moving the Service forward.