Adele ‘disappointed’ by women’s comments about her weight loss 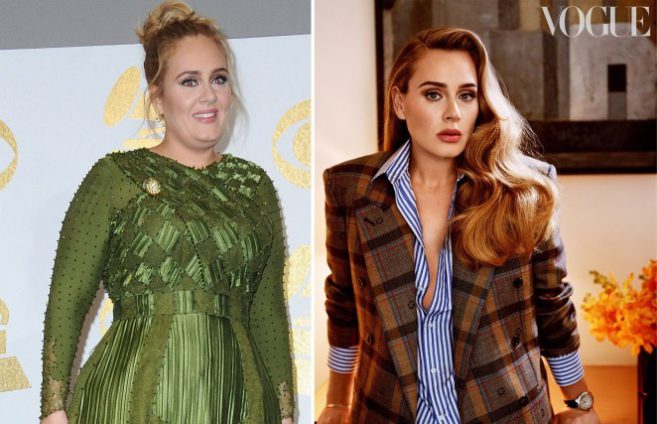 Adele felt “f–king disappointed” that women were the ones having the most “brutal conversations” about her dramatic weight loss.

“My body’s been objectified my entire career,” the Grammy winner, 33, said in her Vogue cover story published Thursday. “It’s not just now. I understand why it’s a shock.”

In early 2020, Adele revealed she had lost about 100 pounds after exercising over a two-year period.

However, some people accused the singer of looking “too skinny” at the time, while others remarked she should not have felt pressured to lose weight.

“Am I the only one that misses old Adele?!” one person tweeted in May 2020. “She really didn’t have to lose all that weight. So [sic] already looked so gorgeous and confident Noooo Adele.”

Another remarked in Dec. 2019, a month after the singer debuted her slimmer figure at Drake’s party, “Celebrating Adele’s weight loss is a garbage thing to do for a million reasons. Here are two: 1. It tells your fat friends you think their bodies are a problem to be solved. 2. The weight loss could be the result of physical or mental health struggles. Weird to cheer about!”

Adele told Vogue, “I understand why some women especially were hurt. Visually I represented a lot of women. But I’m still the same person.

“And the worst part of the whole thing was that the most brutal conversations were being had by other women about my body,” she added. “I was very f–king disappointed with that. That hurt my feelings.”

Despite the criticism, Adele embraced her figure and natural curves on the cover of British Vogue’s November 2021 issue, wearing a stunning yellow corset gown. She also flaunted her new look in a sleek black dress inside the magazine’s spread.

In her American Vogue cover story, she said that part of her health journey started because going to the gym helped relieve any anxious thoughts.

“It became my time,” the “Someone Like You” singer said. “I realized that when I was working out, I didn’t have any anxiety. It was never about losing weight.”

Adele said that having a good man in her life — referring to new boyfriend Rich Paul — has also helped her maintain a positive mindset.

“Rich just incredibly arrived,” she told Vogue. “I don’t feel anxious or nervous or frazzled. It’s quite the opposite. It’s wild — and there is no second-guessing. I’m a 33-year-old divorced mother of a son, who’s actually in charge.”

Multiple sources exclusively confirmed to Page Six in July that the pair were dating after being spotted together at Game 5 of the NBA Finals.

Since then, they have also attended Robert Kraft’s birthday party together and were seen grabbing dinner with a group of friends in West Hollywood.

“The last thing I need is someone who doesn’t know where they’re at, or what they want,” the “Set Fire to the Rain” singer concluded. “I know what I want. And I really know what I don’t want.”

Adele was previously married to Simon Konecki, the father of her 9-year-old son, Angelo.