More than 45 years ago, as a 14-year-old farm kid in Oregon, I watched on a flickering black-and-white television as Richard Nixon’s former White House counsel, John Dean, testified about presidential misconduct in the Watergate scandal — and the second-most-corrupt administration in American history began to crumble.

Now, watching Michael Cohen testify before Congress, I sense a similar historic temblor, only this time it may be the No. 1-most-corrupt administration that is beginning to teeter.

Cohen’s testimony was staggering because of the cumulative sum of alleged misconduct, because of the overall portrait it provided of Donald Trump as a “mobster.”

“I know what Mr. Trump is,” Cohen said, summing up what he learned working at Trump’s side for a decade. “He is a racist, he is a con man, and he is a cheat.”

The range of Trump cons that Cohen outlined was extraordinary, from rigging an auction for the sale of a Trump portrait, to apparent bank fraud, to apparent perjury, to secret hush money payoffs to women, to apparent advance knowledge of a WikiLeaks dump of Democratic emails.

There was even a tantalizing suggestion of other criminal conduct that the Justice Department’s Southern District of New York is investigating that we may know nothing about.

Watergate started with a “third-rate burglary” that Nixon apparently had no advance knowledge of. But the investigation into the burglary led to revelations of a cover-up, of obstruction of justice, of mind-boggling abuses of power. One difference is that Trump’s illegal behavior seems to be more broad-ranging than Nixon’s. 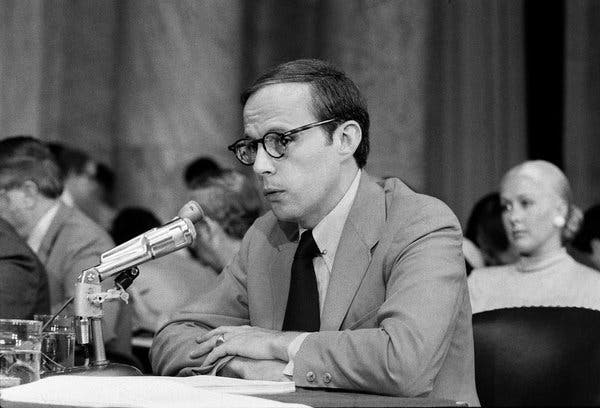 Trump may have been so cavalier because he never expected this office or this scrutiny. I wish the hearing hadn’t taken place precisely during Trump’s summit meeting with Kim Jong-un, because of the risk of undermining nuclear diplomacy, but the irony is that according to Cohen, those Trump-Kim negotiations are a historical fluke.

What was almost as dispiriting as the range of misconduct alleged was the behavior of Republicans on the committee. They seemed less interested in ferreting out the truth than in covering it up; all they wanted to do was protect Trump and discredit Cohen.

It was three hours into the hearing before a Republican even asked Cohen a question about Trump.

Cohen said that he had no knowledge of any sex video obtained by Russia as leverage over Trump, and added that he didn’t have proof of collusion with Russia, only “suspicions.” But he described a kind of kompromat: “Mr. Trump knew of and directed the Trump Moscow negotiations throughout the campaign and lied about it” and then “made clear to me” that “he wanted me to lie” to Congress.

Cohen shot down some of the rumors going around. He said he has no knowledge of Trump having a love child or paying for an abortion, and Trump would “never” physically harm Melania. But the sum total of his testimony was devastating; decades from now, historians will continue to analyze it.

On his first day testifying to the Senate Watergate committee back in June 1973, John Dean said: “To one who was in the White House and became somewhat familiar with its interworkings, the Watergate matter was an inevitable outgrowth of a climate” in which expediency trumped law.

It was in part Watergate that drew me toward journalism, and in 35 years reporting for The New York Times, I’ve known and covered many American presidents and foreign leaders. The American leaders sometimes tried to bamboozle or spin us reporters, but they were tethered to truth and to American values and were fundamentally different from some banana republic leaders who were simply gangsters.

I hope Democrats aren’t gleeful. This is a sad moment in American history, for Nixon walks again. Squared.