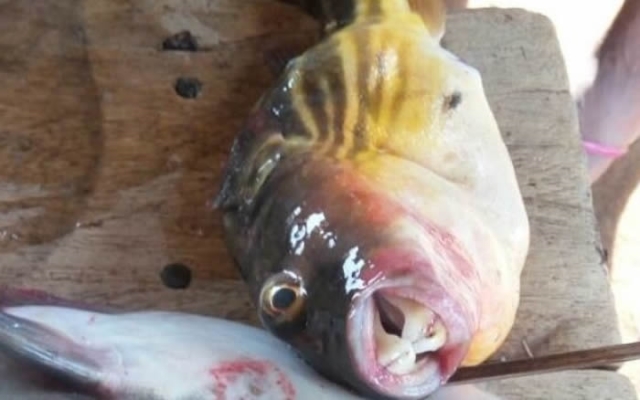 Two persons have been confirmed dead after consuming a poisonous puffer fish in the Kwahu Afram Plains North, a district in the Eastern Region.

Four others who are members of the same family have also been hospitalised.

Health officials investigating the matter say the fish was bought from a market in a local market and used in preparing fufu for a family of six yesterday.

The Acting Medical Superintendent for Donkorkrom Government Hospital, Dr. Ziblim Kasule, where the four are receiving treatment told Joy News the patients were brought in “vomiting with paralysis.”

“According to the wife, after they had finished eating and gone to bed at night, her husband sought her assistance because he was weakened and could not move out of bed so he needed her to help him.

“But just when she tried to get up she realized she could also not move. Together, they called for help outside and were moved to the hospital,” he narrated.

According to him, some of the family members were taken to a nearby prayer camp. Someone checked on the other members of the family who had eaten the food and realized they were suffering from similar problems and were also rushed to the hospital.

He said the hospital managed the case as one of food poisoning when they were brought in.

Two passed away on Saturday morning when the doctors went back to check on their progress which alerted them to call the disease control office.

“They came in and mobilized the various departments responsible for such a case. The police were also called in because some people have lost their lives.

“The four persons including an aged man, a lady in her 30’s and two children who are currently in our care are doing well and responding to treatment. They unable to move as they are suffering from paralysis but they their condition is stable,” he added.

The District Chief Executive (DCE) for the area, Samuel Kena told Joy News he has dispatched officers to markets and fishing communities to warn them about the development so no one consumes the fish.

In January this year, there was a similar case in the Kpando in the Volta region where one person died and six others were hospitalised after consuming a poisonous puffer fish.

Also, in 2017, the consumption of the poisonous fish claimed four lives in the municipality.