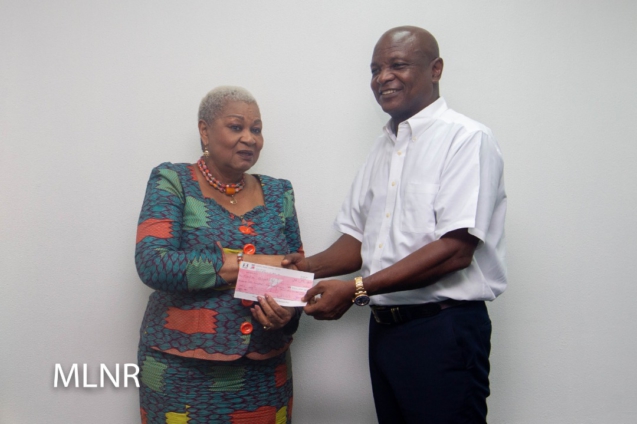 The Appiatse Support Fund has received donations from the Africa World Airlines (AWA) and Sunon Asogli Power Limited as their contributions towards the rebuilding of the model Appiatse community ravaged by the January 20 disaster.

The cheque donation of GH¢200,000 was presented by the Executive Co-Chair of AWA, Togbe Afede XIV, who is also the Awomefia of Asogli State at a brief event on Friday, June 3, 2022.

“Even though the news item was misrepresented, it got me to act quickly,” he asserted.

He described the recent incident at Appiatse as worrying and unfortunate, especially when the residents were living peacefully yet suffered huge devastation.

Togbe Afedze who was full of praise for the Support Fund Committee and the Ministry for their work so far, said that his outfit is willing to support the Committee.

The business mogul maintained that “I am touched to present this donation and want to be a part of the solution to their problem.”

He added that, “I have been blessed by this country and giving back to the society is an obligation. It’s a great honour to lighten the burden of others and the best gratitude to show to God is to help others”, he concluded.”

“This disaster could have happened anywhere in Ghana and could have affected anybody because fuel tankers ply our roads every day and we pass by them always” he stressed.

The Chairman of the 5-member Appiatse Support Fund Committee Rev. Dr. Joyce Rosalind Aryee, reechoed the commitment of the Government to build an environmentally friendly community for the victims of Appiatse.

She announced that so far, the temporary structures are ready and some victims have been moved from the tents into the houses.

She maintained that the reconstruction of the community is also on course and the two committees are working steadily “with what we have been tasked to do.”

Rev. Dr. Aryee also used the opportunity to dismiss the “distorted” media report that the Support Fund has run out of funds.

She stated that, “its amazing that out of bad things, good things happen, it is a distorted story but we are happy that it moved you to donate to the Fund.”

The Chairman of the Support Fund also expressed her utmost appreciation to Togbe Afede and his team saying, despite their competing needs, especially being the Chief of the Asogli State, he has the Appiatse community at heart.