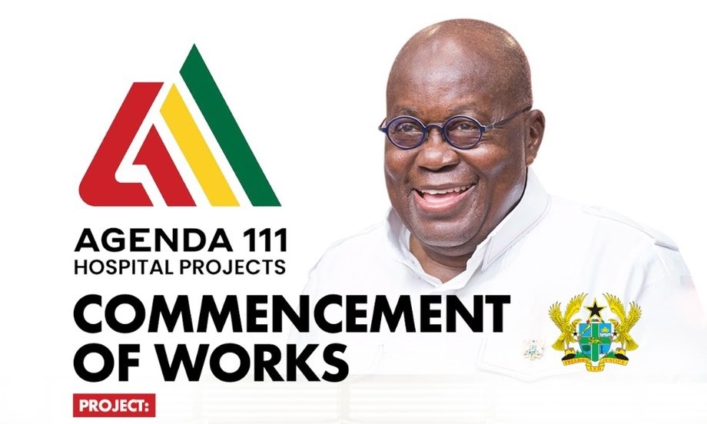 The Ministry of Finance has denied claims by the Minority in Parliament that the government has already spent GH¢636million on Agenda 111 even before it was launched on Tuesday, August 17, 2021.

In a press release issued by Public Relations Unit, the Ministry admitted that in 2020, an amount of GH¢600million was released into to the Health Infrastructure Account at Bank of Ghana (BoG) to support the implementation of the District and Regional Hospitals Projects.

However, the Finance Ministry said contrary to the claims by the Minority in Parliament, the amount, which is equivalent to the $100 million announced for Agenda 111, has not been utilised yet.

“The said amount had been released into the project account at the BOG but not utilised yet. Project commencement has just begun. So far, only GH¢36million has been released as part of pre-construction mobilisation,” the statement dated August, 19, explained.

The statement further clarified that ,“following the commencement of actual project execution as evident in the sod-cutting ceremony of 17th August 2021, we expect to drawdown various amounts from the account which would be managed by the Ghana Infrastructure Investment Fund (GIF).”

The Ministry of Finance stated that as highlighted in the Mid-Year Review Statement, Agenda 111 is expected to be in two phases – Pre-Contract Works and Construction and Execution of projects.

This comes after the Minority in Parliament in a press release noted that Agenda 111, has already been backed with over GH¢600 million despite being launched on Tuesday, August 17, 2021.

The Minority added that as captured in the 2021 mid-year budget review, GH¢36 million was released for the payment of consultancy fees, design, project management and coordination.

“The Minority is of the view that government has some explaining to do on how it spent GH₵636 million as detailed in Appendix 4D and 4E of the 2021 mid-year budget review. Per the appendices, some GH₵36 million has been spent on project designs, consultants and coordinators this year, however, the sum of GH₵600 million released and utilised in 2020 has no details whatsoever.”

Speaking on Joy FM‘s Top Story on Wednesday, the Ranking Member on the Health Committee in Parliament, Kwabena Mintah Akandoh said the Minority will push for further investigations into how the government allegedly spent GH¢636million on Agenda 111 before its launch.

Mr Akandoh said that even though the Health Committee in Parliament has requested documents on Agenda 111, not a single detail has been given to the Committee.

Meanwhile, the Finance Ministry has stressed that Government is committed to tackling Ghana’s health infrastructure deficit.

“In this regard, we will ensure the use of local teams comprising of Ghanaian consultants, project managers and construction firms to execute the project and also ensure due process during procurement and disbursement,” the Ministry assured.