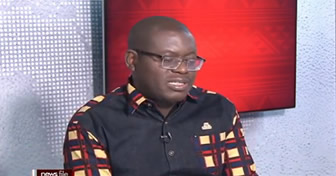 Honorary Vice President at IMANI Ghana, Bright Simons, has reiterated his reservations about the controversial Agyapa Royal deal; stating that, the deal, remains ‘unconscionable’ and ‘unpatriotic’.

He made these comments, while contributing to discussions on NewsFile on Saturday.

In his submission, he rehashed the point that, the deal will not inure to the benefit of Ghanaians, and therefore the need for it to be completely discarded.

According to him, the structuring of the deal alone, gives reason for worry; given that it threatens the minimum royalties Ghana derives from its gold and mineral reserves.

We’ve seen instances where consistently, the current government takes future streams of income that other governments will use, front loads it, keep that money for today, and forgets about future generations.

Think of all the money from ESLA or the energy levies. Think of the monies from the GETFUND. And consistently, we create these structures, front load the money, spend it, forgetting how we are going to pay for our other debts in a few years forward. We think that is not really acceptable”, he lamented.

He also added that, “there should be a sense in which even if the government wanted to securitise the gold, through a much more cleaner, efficient process than has been proposed, they should not be looking at all the discretionary income that we earn from royalties apart from those that are bound by statute to other purposes.

That money that they want to put in, they should have put it in a smaller fraction of the gold at a much higher valuation”.

The comments by Bright Simons, were in reaction to a recent call by the Finance Minister, Ken Ofori-Atta, for a re-look at the controversial Agyapa Royalties Agreement, instead of abandoning it.

Speaking at a press briefing to announce details of the African Development Bank’s 2022 Annual General Meeting on Thursday, the Finance Minister explained that the Agyapa deal “is not about whether the monetisation of mineral royalties or listing of the company is bad or good, it is good because that is how you raise resources”.

But Bright Simmons thinks otherwise. In expressing his reservations on NewsFile, he accused the Finance Minister of failing to engage the relevant stakeholders on the deal, after its implementation was stalled.

This position was further reiterated by Dr. Steve Manteaw and the Executive Director of the African Centre for Energy Policy, Benjamin Boakye. Expressing their opinions on NewsFile, they posited that failure of the Finance Minister to widen consultations on the deal, is unhealthy.

Making reference to the initial circumstances of the Agyapa deal, Bright Simmons praised the efforts of the former Special Prosecutor, Martin Amidu, for his rigour and vigilance in exposing the gaps in the deal.

“So our argument is, this is a way to take something that belongs to the people of Ghana, and give it to investors and others that are perhaps favoured by this administration. But not necessarily people that if Ghanaians had a say in the matter, they will want to take over those assets”, he added.