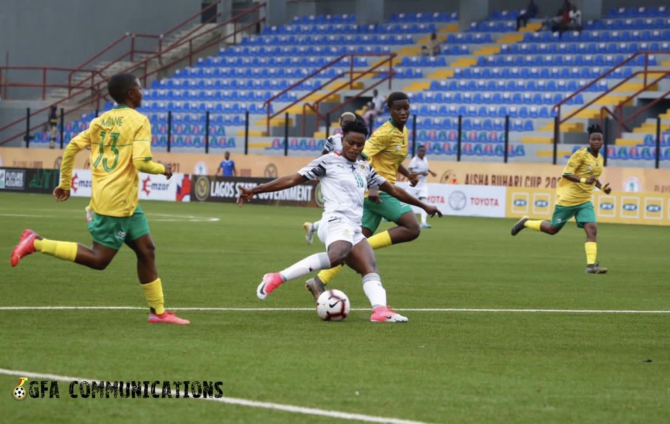 South Africa’s senior women’s team Banyana Banyana eased past Ghana’s Black Queens with a 3-0 win in the Group B opener of the Aisha Buhari Cup in Nigeria on Friday evening.

Both teams produced delightful football in the first half, which ended with South Africa leading 1-0 thanks to a goal by Hildah Magaia, who nodded home the stray ball after it bounced off the crossbar after a Thembi Kgatlana shot on goal.

Ghana’s response to the opening goal was swift, and their midfield produced some neat touches to send Grace Asantewaa clear, but her parting shot was smartly gathered by South African goalkeeper Kaylin Swart, who looked superbly confident between the sticks all afternoon.

South Africa missed a gilt-edged chance to go further ahead, but there was no one at hand to steer the ball into an empty net after a powerful Kgatlana strike.

Ghana’s goalkeeper Fafali Dumehasi brought off a full-length dive to parry Kgatlana’s shot, and the ball trickled past the goals before the defence pounced to clear.

After this let off Ghana switched play to the opposite end and in a goalmouth frenzy, Ghana had three attempts on goal cleared. Swart bravely cleared once, and her supporting defence rallied twice in quick succession.

In added time at the end of the first half, South African striker Gabriela Salgado was unlucky not to score when her shot from range struck the crossbar.

After the break, Ghana looked the likelier to score and it could well have materialised, but Swart once again intervened.

Moments later there was a transition in play that caught Ghana napping. Kgatlana ran in from 35 metres out and turned the opposition defence inside out before rounding the hapless goalkeeper.

Straight after this goal, Ghana’s heads dropped and with that, they seemed to lose their thrust.

Ghana tried long-ball tactics later in the second half after they made several substitutions. The fresh legs did manage some high press towards the end, but South Africa’s defence, well marshalled by captain Janine Van Wyk, cleared their lines whenever threats emerged.

At the death, Sibulele Holweni drove the final nail in the Ghana coffin with South Africa’s third goal.

The Black Queens will be in action on Monday when they face Cameroon.