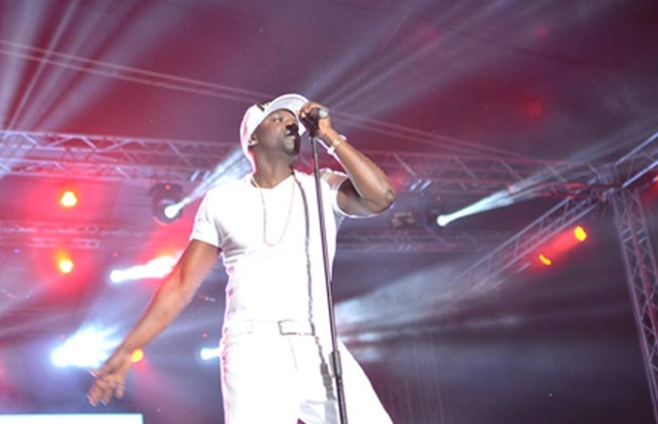 International R&B super star, Aliaune Damala Akon Thiam, known on stage as Akon, promised to give Ghanaians a concert of a lifetime and without a doubt, he delivered just that.

His performance Saturday night at the Accra Sports Stadium as the headline act for the Guinness Big Eruption Concert, will definitely go down as one of the best, if not the greatest performance(s) by a foreign artiste in Ghana.

For close to two hours, the Senegalese-born singer unleashed an unlimited dose of unadulterated entertainment to over 20,000 music lovers, who thronged the stadium for the show.

Singing almost all his well known tunes, including, 'I Wanna Love You', 'Mama Africa', 'So Paid', 'Oh Africa', 'Play Hard', coupled with an unparalleled stage craft, Akon was at his peak on night.

He got patrons singing along with him non-stop through his performance. The opening act for the night, international hip-hop artiste, Big Sean, might have wowed the crowd from the beginning but Akon's performance overshadowed his.

This was Big Sean's first performance in Ghana and although he was not really popular in the country, he managed to thrill patrons with some of his well known tunes including 'My Last', and 'Clique'.

Akon followed the Detroit rapper and during his entire performance, it was obvious that he had done his homework, he clearly knew what the crowd want and he served them right.

The highpoint of Akon's performance was when he entered a giant balloon and made his way into the crown. The elated crowd tossed him from one side to the other. They were just amazed at the stunt.

Nigerian artiste, Wizkid, who was also one of the main artiste on the night, put up what many described as his worse performance in Ghana to date.

The Nigerian known for several hit songs including 'The Matter' has over the years enjoyed a string of impressive performances in Ghana but this night dinted that record.

Wizkid was just below par. He was not in his elements and he struggled to even sing. Fans were just disappointed!

Reports said the Nigerian's poor performance on the night  was due to the fact that he was under the weather.

Many had throng the stadium to witness what has been described as the battle for the country's dance hall supremacy.

Shortly after rapper E.L. had finished his performance, the stage was set for the much anticipated battle between the two artistes, who controlled a huge chunk dancehall music followers in Ghana.

Samini was first to prove his worth. The 'Time Bomb' hit singer brought everything to bear on the night. He was firm, matured on stage and singing all his popular tunes backed by live band, as he wowed the crowd.

He charmed the crowd with his stage craft and his hot backup dancers. His intermittent freestyle of events happening around him also received loud cheers and applauds from an elated audience.

Samini's transition from his old tunes – including Linda, Odo, and Gye shi – to new ones such as 'Time Bomb' was well crafted and although it was live band, he delivered them with ease.

Samini left the stage setting the bar very high. Many waited to see if self-professed 'Dancehall King' Shatta Wale could surpass that bar.

Bandana arrived on stage in a 'crane' and it caught the attention of an expectant audience, who were ready to see what he had under his sleeves.

Shatta Wale, who did not perform with a live band, shot himself in the foot, when he ruined his performance with intermittent use of insults and vulgar language. He took needless spikes at people to the disappointment of many.

Although he dished out most of his hit tunes – including 'Dancehall King' and 'Enter The Net' -, the SM4Life act failed to beat Samini's record.