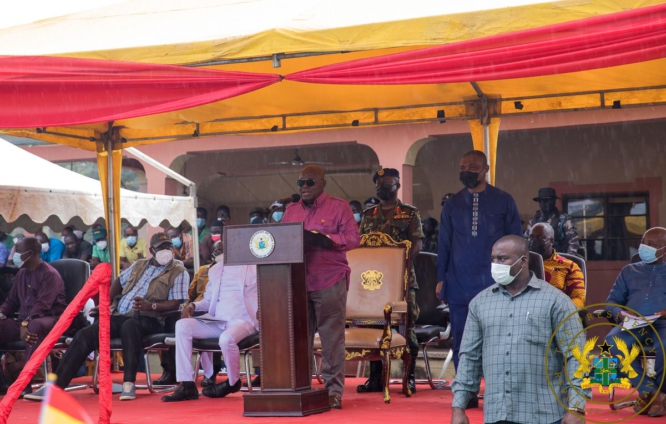 President Akufo-Addo on Saturday, September 4, cut the sod for the commencement of work on the reconstruction of the 67-kilometre Agona Nkwanta – Tarkwa Road.

The ceremony took place as part of his two-day tour of the Western Region,

Funded with a 95-million-Euro facility from Deutsche Bank AG, Frankfurt, Germany, the project is expected to be completed by August 31, 2024, i.e. 36 months.

The road project, once completed, will link Tarkwa, one of the major economic centres of Ghana, to the port city of Takoradi and to the national route, N1, which links Ghana to Cote D’Ivoire.

It also connects the mineral and agricultural rich lands in the Western, Ashanti, Western North and Central Regions to Takoradi, as it serves as the shortest and most efficient route for the transportation of gold, manganese, bauxite, timber as well as agricultural goods like cocoa, rubber and timber, to Takoradi.

Speaking at the sod-cutting ceremony, President Akufo-Addo noted that the reconstruction of the road, being undertaken by Messrs Rango-Gabriel Couto, a wholly-owned Ghanaian company, forms part of a comprehensive plan of action being taken by government to improve the road network in the Western Region, and, indeed, in all parts of the country.

Specific to the Western Region, government has embarked on the construction of the PTC Interchange in Takoradi, which is the first interchange in the western part of Ghana, and is estimated to be completed by June, 2023.

Construction of the Sekondi, Adiembra and other selected roads around the Takoradi Harbour have been awarded, and works are expected to commence in October this year, with the construction of the Adwofua-Osei Kojokrom also ongoing and 18% complete.