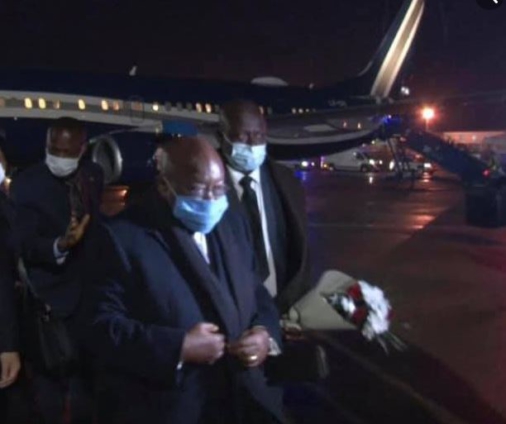 The MP for North Tongu, Samuel Okudzeto Ablakwa, has alleged that President Akufo-Addo is back to his lavish spending as he continuous to patronize the services of private aircrafts instead of the Presidential jet.

In a Facebook post, Mr Ablakwa stated that the President failed to at least charter a commercial flight in his recent foreign trips as he did when he attended the Dubai Expo on March 7 after being urged to protect the public purse.

According to him, President Akufo-Addo rather used “his most cherished ultra-luxury toy – the LX-DIO” which now rents for $18,000 per hour during his travel to the United States of America and the United Kingdom.

“With the pretentious notion that the obnoxious E-Levy has been secured to rake in more revenue to finance his lavish indulgences, and after hurriedly granting a presidential assent of dubious validity, as President Akufo-Addo knows very well that 136 NPP MPs cannot purport to constitute a decision-making quorum; President Akufo-Addo is back to his old ways of Russian Oligarchic travels,” he added.

He also noted that before the President landed at 6:40am at the Dulles International Airport in Washington on April 1, the “ubiquitous luxury” LX-DIO had landed at the same airport the previous day at 12:27pm waiting for him.

“President Akufo-Addo couldn’t wait to fly his favourite US$18,000 an hour LX-DIO from Washington where he departed at 10:13am and arrived at the Charlotte Douglas International Airport in North Carolina at 11:22am – a flight time of 01:09. It is important to acknowledge that there were more than a dozen available commercial flights with business class tickets not exceeding $700 in value,” he continued.

The North Tongu MP indicated that President Akufo-Addo kept the LX-DIO with him as he addressed Bishop T. D. Jakes’ summit.

According to him, the President boarded the same “extravagant jet on the 2nd of April, 2022 at 9:28am US time and arrived at the London Stansted Airport at 9:40pm UK time. A flight time of some 7 hours 54minutes.”

In view of this, the MP told Ghanaians that “our crusade to get the President to keep his promise of protecting the public purse and our resolve to end naked profligacy still requires more work.”

“After a momentary glimmer of hope when he was compelled to fly commercial to Dubai last month, many had thought his penchant for egregious betrayal of the Ghanaian people by his obstinate dissipation of scarce taxes on his sybaritic lifestyle despite a hitherto loud promise to protect the public purse now belongs to the past.”

Mr. Ablakwa stressed that the conduct of President Akufo-Addo is unacceptable “considering his government’s public posture of massive expenditure cuts as a direct response to the current economic crisis.”

Again, Mr Ablakwa noted that since May last year, the Ghanaian taxpayer has spent at least GHS28.5million on President Akufo-Addo’s “ostentatious” travels.

Meanwhile, President Akufo-Addo is expected back into the country on Wednesday, April 6.

The President was accompanied on his trip by the Minister for Foreign Affairs, Shirley Ayorkor Botchwey, MP, and officials of the Presidency and Foreign Ministry.

DISCLAIMER: The Views, Comments, Opinions, Contributions and Statements made by Readers and Contributors on this platform do not necessarily represent the views or policy of Multimedia Group Limited.
Tags:
Akufo-Addo
Samuel Okudzeto Ablakwa
T.D. Jakes