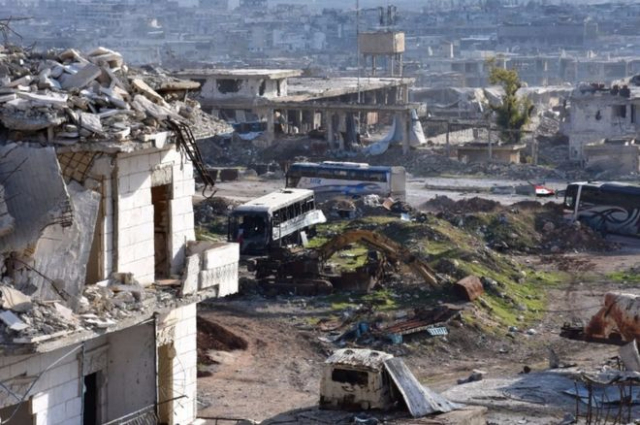 Evacuations have resumed from east Aleppo, with buses and ambulances leaving rebel areas of the Syrian city, a UN official says.

Thousands are waiting to leave east Aleppo in desperate conditions.

The UN Security Council is said to have agreed a compromise to allow UN monitoring of the operation. Russia earlier rejected a French-drafted plan to send UN officials to east Aleppo as "a disaster".

"We expect to vote unanimously for this text tomorrow [Monday]," said US Ambassador to the UN Samantha Power.

The initial efforts to evacuate the last rebel-held enclaves in the city collapsed on Friday, leaving civilians stranded at various points along the route out without access to food or shelter. Bombardment of east Aleppo has left it virtually without medical facilities.

Despite further setbacks on Sunday, buses and ambulances began moving out of the area after nightfall.

"Evacuations are on," the UN official said in an email message to Reuters news agency, adding that the first people left east Aleppo at around 23:00 local time (21:00 GMT).

From Khan al-Assal, the evacuees are expected to travel to government held parts of Aleppo and Idlib provinces.

Pro-government forces previously demanded that people must be allowed to leave the mainly Shia villages of Foah and Kefraya in Idlib province, besieged by rebels, in order for the evacuation of east Aleppo to restart.

Some 1,200 people were due to be taken out of the former rebel enclave in return for a similar number moved out of the two government-held villages, Foah and Kefraya.

However, it is not thought any of the some 2,000 people believed to live in the two villages left on Sunday.

Earlier on Sunday, armed men set fire to at least five buses that were about to transport the sick and injured from the villages.

The jihadist groups have not commented on the attack.

However, the Free Syrian Army, a more moderate rebel faction, condemned it as a "reckless act endangering the lives of nearly 50,000 people" in east Aleppo.

Among the people waiting to leave eastern Aleppo are sick and wounded children, said the children's charity Unicef.

Some young children have been forced to leave without their parents, the charity said, and hundreds of vulnerable children remain trapped.