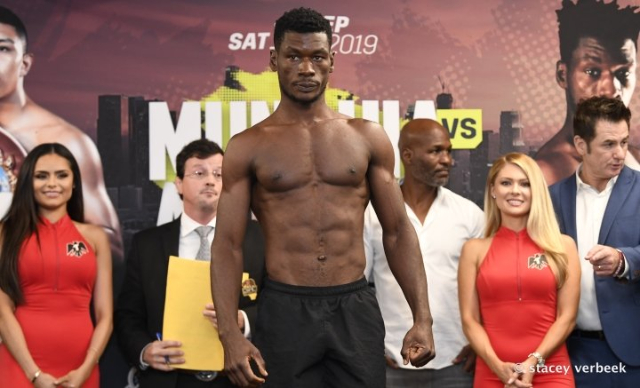 Boxer Patrick Allotey has issued a passionate plea to the public and the Ghana Boxing Authority (GBA) for his infamous assault incident on which has now landed him in court.

Allotey was captured in a video on January 26, assaulting a fan identified as Michael Siaw, who apparently had blocked his view at the popular stand of the Accra Stadium.

He has received a six-month suspension from the Ghana Boxing Authority.

The sober-looking Allotey who was a guest on last Saturday’s Joy Sports Link on Joy 99.7 said he had gone to the Stadium, on the said day to watch and support Asante Kotoko defender, Christopher Nettey, who is a personal friend of his.

“Christopher Nettey is a personal friend of mine and he is the reason I would go to the stadium. Whenever he is playing and I make sure I go to support him.”

“I also decided to sit specifically at the popular stand because it’s fun watching games there. The jokes and the thrilling atmosphere created by the fans there always excite me,” he revealed on the show.

Allotey, who has hardly recorded any such regrettable public behaviour, also revealed that the issue has affected him psychologically.

“I am unable to eat well and I lose a lot of sleep because I have always stayed out of trouble and focused on my work. My wife is pregnant with our third child and I feel very bad about all this, I don’t want my children and family to be associated with my shameful behaviour. I am very ashamed of myself. It’s really hard for me at this time.”

Patrick Allottey who lost an opportunity to win the WBO super welterweight title against the champion Jaime Munguia, in September last year, has also apologised to the fans of both clubs, for his behaviour at the Stadium on January 26.

Allottey was arraigned before an Accra circuit court earlier on Monday where he pleaded not guilty to an assault charge.

He has since been granted a GHC100,000  bail with three sureties.

Included in these is the depositing of his passport at the court registry.

The former WBO super-welterweight title contender is also to report to the Police every Wednesday.

The case has been adjourned to February 25.

DISCLAIMER: The Views, Comments, Opinions, Contributions and Statements made by Readers and Contributors on this platform do not necessarily represent the views or policy of Multimedia Group Limited.
Tags:
Patrick Alotey