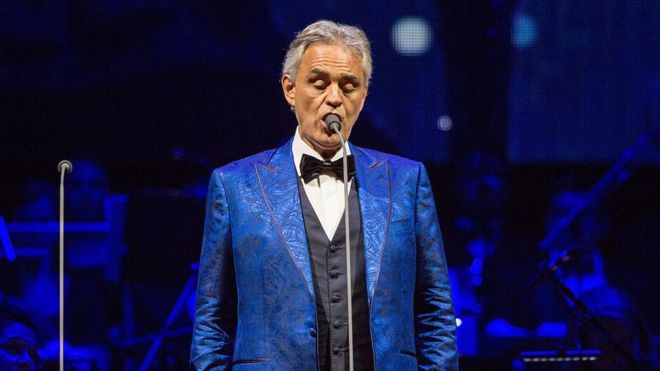 Italian opera singer Andrea Bocelli has said he felt “humiliated and offended” by lockdown measures imposed in the country due to coronavirus.

“I could not leave the house even though I had committed no crime,” Bocelli said.

He also admitted to disobeying lockdown rules and believing the severity of the pandemic had been overblown.

His comments will surprise many as he had become a symbol of national unity at the height of the lockdown.

On Easter Sunday, the acclaimed Bocelli sang alone at a deserted Milan cathedral in a live-streamed solo performance called Music for Hope.

Bocelli made the remarks at a conference in Italy’s Senate attended by opposition politicians including Matteo Salvini, leader of the far-right League party.

Mr Salvini has attacked the government of Prime Minister Giuseppe Conte over the handling of the health crisis in Italy.

A national lockdown began in Italy in early March and was eased in stages over the following months.

During Bocelli’s speech, which he delivered in Italian, the 61-year-old said he disobeyed lockdown rules “because I did not think it was right or healthy to stay home at my age”.

He added: “I am a certain age and I need sun and vitamin D.”

Bocelli also suggested other citizens should “refuse to follow the rules”.

He said he thought the outbreak had been overblown and he didn’t know anyone in intensive care. “So what was all this sense of gravity for?” he asked.

“Let’s refuse to follow this rule. Let’s read books, move around, get to know each other, talk, dialogue,” he said.

Bocelli, who has two grown-up sons from his previous marriage and a daughter with his second wife and manager, Veronica Berti, also criticised the Italian government’s approach to reopening schools.

“I have an eight-year-old daughter and it’s unthinkable that these children will have to go to school divided by a piece of plexiglass and hidden behind a mask,” he said.

“It’s unthinkable that schools were closed so quickly, and with the same speed nightclubs were reopened, where young people go not to learn, but to disperse their brains.”

Bocelli has since claimed his comments were “misunderstood”, adding that his foundation has helped many people who have had the virus.

Italy’s lockdown rules have now been largely regionalised but face masks are mandatory on public transport and in shops, and social distancing of one metre is required in public spaces.

Theatres and concert halls can now reopen with a maximum of 200 audience members for indoor events and 1,000 for outdoor areas.

DISCLAIMER: The Views, Comments, Opinions, Contributions and Statements made by Readers and Contributors on this platform do not necessarily represent the views or policy of Multimedia Group Limited.
Tags:
Andrea Bocelli
coronavirus pandemic
Italy