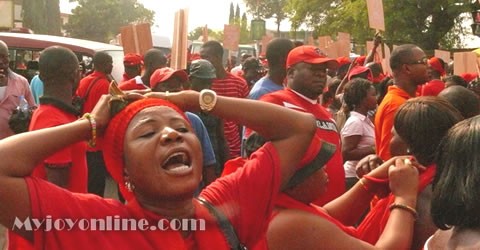 This happened during a demonstration staged on Wednesday to register what the residents call a neglect by the University.

They complained of bad roads, lack of scholarships opportunities for their wards at the university, lack of employment  for their youth among others.

According to the residents, drivers charge them exorbitant fares due to the deplorable nature of the roads in the area.

"We expect the university to give the youth of this community full scholarships and construct the roads so we can benefit from the university being cited on our land," an angry resident said.

He added that the university's main drainage system which lies in the community is in a poor state.

"We have written several letters to the university authorities about it but to no avail," one resident told Joy News' Richard Kojo Nyarko.

In addition, they accused some male students of the university of impregnating young ladies in the area and neglecting them.

In his response, the Public Affairs Director of the University indicated that the university authorities after receiving a letter from the youth outlining their problems held a meeting with the opinion leaders.

According to him, the opinion leaders apologised to the authorities and assured them they would inform the youth of the community.

Major Retired Kofi Bentum believes the demonstration was triggered by a recent commissioning of a toilet facility in one of the villages.

He, however, added that the affairs between students and ladies in the town are "love affairs between two consenting adults and if they are not adults then it's a criminal case and the law must take its course."