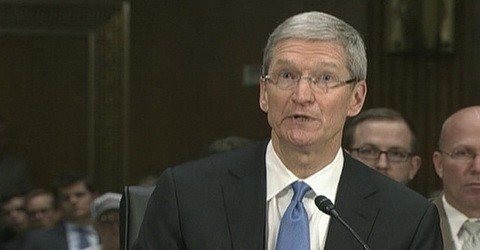 The technology giant Apple has been defending itself against accusations that it’s avoided paying tax on tens of billions of dollars in profits.

Chief executive Tim Cook told a US Senate committee Apple paid all the taxes it owed, complying with both the law, and the spirit of the law.

The head of a Senate committee panel had earlier accused Apple of exploiting an absurdity in its tax payments.

Apple’s grilling comes as leading global brands are under growing scrutiny over their tax methods.

Google, Amazon and Starbucks have all appeared recently in front of UK politicians to answer questions about their affairs.

One country where Apple has a favourable tax regime is the Republic of Ireland.

On Monday, the Subcommittee said Apple had used “a complex web of offshore entities” to avoid paying billions of dollars in US income taxes. But it said there was no indication the firm had acted illegally.

Mr Cook told the panel that a “dramatic simplification” of US tax laws was required, and said the firm believed that reform should be “revenue neutral”.

Apple has been accused by The Senate Permanent Subcommittee on Investigations, which has been examining “methods employed by multinational corporations to shift profits offshore”, of being “among America’s largest tax avoiders”.

Committee member John McCain said although the action taken by Apple was legal, it could be unfair to other companies: “My question is, couldn’t one draw the conclusion that you and Apple have an unfair advantage over domestic based corporations and companies, in other words, smaller companies in this country that don’t have the same ability that you do to locate in Ireland or other countries overseas?”

Mr Cook said he believed Apple was one of the largest taxpayers in the US, having paid $6bn in federal corporate income tax in the 2012 fiscal year.

Mr McCain said: “Apple claims to be the largest US corporate taxpayer, but by sheer size and scale, it is also among America’s largest tax avoiders.”

Mr Cook also told the hearing that Apple considered itself an American firm, and was one that had created jobs across the country.

“We are proud to be an American company, and equally proud of our contribution to the American economy,” he said.

In its report into Apple, the subcommittee’s chairman Carl Levin said: “Apple wasn’t satisfied with shifting its profits to a low-tax offshore tax haven.

“Apple sought the Holy Grail of tax avoidance. It has created offshore entities holding tens of billions of dollars, while claiming to be tax resident nowhere.”

Apple has stated: “Apple does not move its intellectual property into offshore tax havens and use it to sell products back into the US in order to avoid US tax.

“It does not use revolving loans from foreign subsidiaries to fund its domestic operations; it does not hold money on a Caribbean island; and it does not have a bank account in the Cayman Islands.”

It added that it had “substantial” foreign cash because it sells the majority of its products outside the US, and these foreign earnings were taxed in the jurisdictions where they were earned.