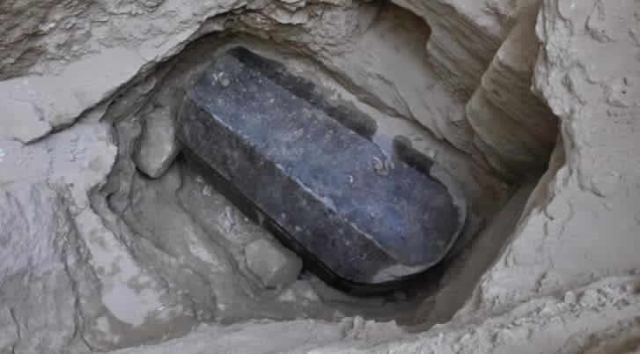 Egyptian archaeologists have unearthed a rare find — an enormous black granite sarcophagus said to be the largest ever found in Alexandria, Egypt.

And they don't know who or what lies inside.

The 6-foot tall (185 cm) coffin was found buried about 16 feet (5 meters) underground, along with an alabaster head of a man whose features were worn beyond recognition.

It was discovered on July 1 at a construction site during a routine archaeological inspection by government officials, the Egyptian Ministry of Antiquities announced, in an official Facebook post. The news was reported by Al-Ahram, Egypt's state-run newspaper.

Egypt is governed by strict laws to protect and preserve national antiquities. Under the Protection of Antiquities Law, all antiquities are considered property of the State.

Archaeologists date the site back to sometime within the Ptolemic era, between 305 and 30 BCE.

Ancient Greek and Roman artefacts are not unusual discoveries in Alexandria, the famed home of Macedonian ruler Alexander the Great. But unlike other ancient Egyptian tombs that have been opened and looted, the 2,000-year-old sarcophagus has until now, remained undisturbed.

Dr. Ayman Ashmawy, head of the Ancient Egyptian Antiquities Sector, said the layer of mortar between the lid and the body of the sarcophagus indicated that it had not been opened.

The tomb's reported preservation could give archaeologists a rare opportunity to study its contents.

Local media reports that the large sarcophagus will need to be lifted by a tow truck and transferred to an archaeological site to be opened and examined.