A Catholic archbishop in Australia has been given a maximum sentence of 12 months in detention for concealing child sexual abuse in the 1970s.

Philip Wilson, now archbishop of Adelaide, is the most senior Catholic in the world to be convicted of the offence.

He was found guilty by a court last month of covering up the crimes of a paedophile priest in New South Wales.

On Tuesday, a magistrate said Wilson was likely to avoid time in jail.

Wilson is expected to serve his sentence in "home detention" and will be eligible for parole after six months, Australian media reported.

He has not resigned as archbishop, despite relinquishing his duties in the wake of his conviction.

In May, a court found he had failed to report his colleague James Patrick Fletcher's abuse of altar boys to police.

Wilson, then a junior priest in the Maitland region, had dismissed young victims in a bid to protect the Church's reputation, a magistrate ruled.

During his trial, Wilson denied that he had known about Fletcher's actions.

The archbishop's lawyers had sought to have the case thrown out on four occasions, citing the 67-year-old's diagnosis with Alzheimer's disease.

One of his victims, former altar boy Peter Creigh, told the court he had described the abuse to Wilson in detail in 1976, five years after it took place. 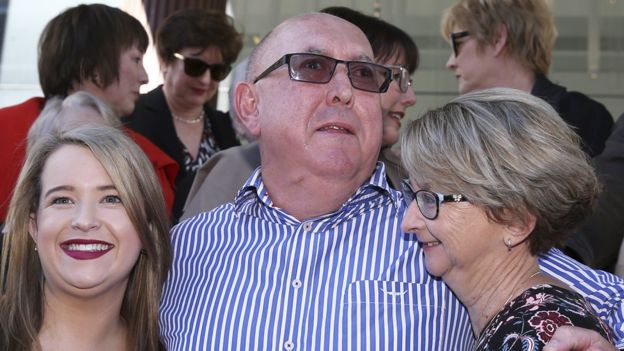 Magistrate Robert Stone rejected Wilson's claims that he had no memory of the conversation, and said he had found Mr Creigh to be a reliable witness.

Another victim, who cannot be named, testified that Wilson had told him he was telling lies, and to recite 10 Hail Mary prayers as punishment.

How has Australia been handling such cases?

In 2012, then PM Julia Gillard set up a royal commission, the country's highest form of public inquiry, to look into institutional responses to child sexual abuse.

By the time it had published its final report in December last year, it had handled 42,000 calls and referred more than 2,500 cases to the authorities.

It said institutions including churches, schools and sports clubs had "seriously failed" to protect children.

PM Malcolm Turnbull said "a national tragedy" had been exposed.

How does this compare to convictions elsewhere?

The first cases of molestation by priests came to light in the 1980s. In the 1990s, revelations began of widespread abuse in Ireland, with cases spreading to more than a dozen countries this century.

Ireland, the US and Australia have carried out national inquiries, and there have been cover-up scandals such as in the Archdiocese of Boston in the US.

Although there have been convictions of priests for sexual abuse, in many cases accused clergymen were either moved or retired by their Church, with financial settlements agreed in some cases, particularly in the US.

Victims rights groups have complained the convictions do not often extend beyond priest level, with few senior figures brought to account, although a number have left their positions over their actions in sexual abuse cases, including Cardinal Bernard Law in Boston.

One of the most high-profile recent cases has been in Chile. All of its 34 Catholic bishops offered to resign. Pope Francis had handed them a 10-page document accusing Chile's Church hierarchy of negligence in sexual abuse cases.