Arise Ghana Demo: We are not calling off the protest - Conveners - MyJoyOnline.com

Arise Ghana Demo: We are not calling off the protest – Conveners 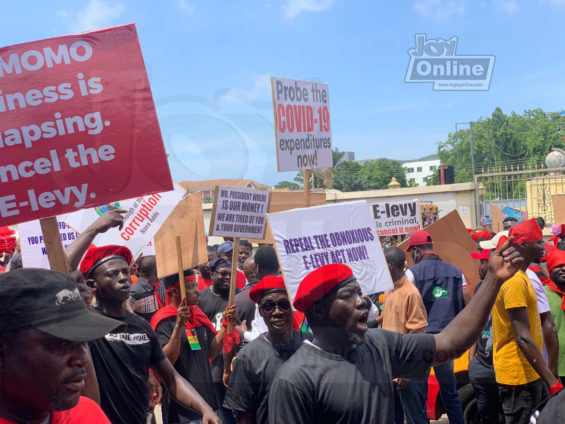 Conveners for the Arise Ghana demonstration have stated that they are not calling off the protest despite an order from the court and the chaos that has characterized the exercise.

Speaking to JoyNews, one of the conveners, Edem Agbana said the protest is not ending until “we [the protestors] decide to leave here.”

“That 4 pm is only in the minds of Akufo-Addo and his biased judges. We are demonstrating. As and when we feel like going, we will leave here,” he added.

The Accra High Court on Monday ruled that the protest by Arise Ghana on June 28 and 29 could only be staged between the hours of 8 am and 4 pm.

The court additionally directed that the protest should commence at the Obra Spot in Accra and end at the Independence Square.

But the group, unsatisfied with the ruling of the High Court, proceeded to file a suit at the Court of Appeal to set aside the directive.

Though the court is yet to rule on this, the protestors hit the streets at 8 am to register their displeasure over the country’s current economic situation.

It was a peaceful event until a stand-off between the police and some protestors led to the firing of tear gas and rubber bullets.

Venting his spleen over the conduct of the police, Mr. Agbana accused the government of using the Service to disrupt the demonstration.

“We are not calling off the protest,” he insisted.

“We have a chaotic President with his chaotic government deciding to use the Police Service as puppets to perpetuate this violence.”

He further explained that the protestors retaliated in self-defense.

“Self-defense is also in our laws. We saw the police firing tear gas and pepper spray and what have you. These innocent, unarmed citizens only decided to protect themselves and sack the police away. We the leaders are ready to be held responsible,” he added.

He further called for the resignation of the Inspection General of Police (IGP), George Akuffo Damapare over the chaos that happened.