Art may not feed us but to be young, restless and creative is still a joy – M.anifest

It was an unremarkable Friday evening in June. I sat across from my road manager – the same guy who told me beer tastes better when someone else is buying – at a local bar. It’s a bar with no signage that we affectionately call “the garden”.

To call it a bar is generous. The garden is, at best, a spot: an unassuming gritty place with plastic chairs, almond trees, an inexpensive sound system, a kiosk, and most importantly for the clientele, cheap booze. On any given evening you will find a random mix of disenchanted elderly men with a distaste for sobriety, and young men with a penchant for staying low-key.

Half the people are too intoxicated to care I’m there and the other half give me friendly dap, shout a line from one of my songs and keep it moving.

The sound of young Ghana, Afrobeats, dominates the playlist at the garden, alongside tunes from our regional cousins in Nigeria. It wasn’t always so. On this unremarkable Friday I’m reminded of this remarkable feat: we have achieved a prolific music scene without a formidable production infrastructure, or the presence of big record labels which can dole out a recording budget to young artists. Underneath the predominantly Auto-Tuned vocals are young voices that want to be heard.

I understand too well the burning desire to have your voice heard even without the backing of a traditional label. About 2005 I had just graduated, with a now dusty economics degree and a tonne of musical aspiration but little knowhow. I took matters into my own hands. Piece by piece I accumulated second-hand recording equipment off Craigslist. My apartment became my studio and in 2007 I released my first album, Manifestations, to much acclaim in Minnesota. Sometimes creativity is simply making a lot out of a little. I smile so broadly when I see my younger compatriots in Ghana adopt the same do-it-yourself approach.

Truth be told, from quaint Saltpond to big city Accra, creative spaces are neither fancy nor spiffy in these parts. Dancefloors are ruled by tunes toasting the glamours of life, tunes that are made in small, bedroom-sized studios, often with broken-down air conditioners rather than platinum discs decorating the walls. Optimists will muse at the irony, cynics will scoff and call it a cruel joke. Both factions would have to acknowledge that a lot of music is being made, regardless.

Our parents’ generation often humblebrag to us about how it was in their day. The plethora of highlife bands, legendary club nights at the Ambassador hotel (now the plush Mövenpick hotel), or how AB Crentsil and the Sweet Talks recorded their 1978 record Party Time in Hollywood in Los Angeles. And of course they had Osibisa, who were regulars in the charts, and easily the biggest Ghanaian band of all time. Yes, times have changed. They can question our competence but they can’t begrudge us our will and zeal to create in a climate where music is regularly consumed but there is little support for it financially.

I moved back home three and a half years ago after a 10-year sojourn in America. I have not only felt the restlessness of youth here, simmering and festering, I’ve lived it. Frequent power cuts alone (unaffectionately called dumsor) have made music more expensive and frustrating to create. Yet there is an increasing cadre of young hopefuls who invest their lives in creative ventures. 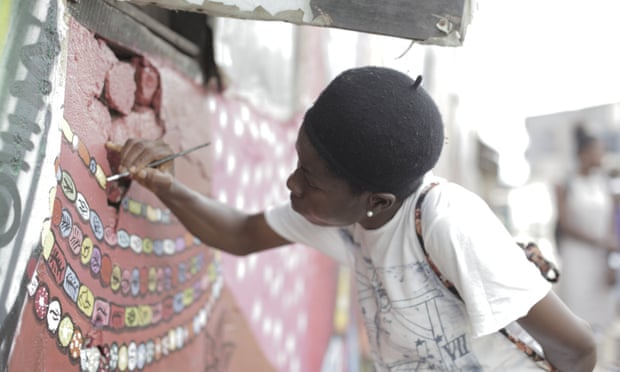 The Chale Wote street art festival is a colourful yearly arts extravaganza in Jamestown, along the Accra coastline.

Take, for instance, the Chale Wote street art festival: a colourful yearly arts extravaganza in the heart of Jamestown, a historical neighbourhood along the Accra coastline more famous for its boxers. Chale Wote is an edgy, inclusive and bold initiative that invites artists out of the periphery and encourages young people to unapologetically indulge in homegrown art. Conceived by a pair of visionaries, Mantse Aryeequaye and Sionne Neely, Chale Wote has emerged despite the absence of a big budget.

Art is not a luxury, it’s our identity. It’s our message in a time capsule. It’s our inspiration to break from the humdrum, to know that we can shatter the ceilings of possibility and the frustrations of our daily routines. We’re in desperate need of inspiration to develop our homeland. We want more. No – we need more. We can no longer just cling on to the glories of the Osibisas, El Anatsuis, Ablade Glovers and other greats. We must contribute to shaping the look, feel and spiritual essence of our homeland.

Granted, we have some things to sort out. We’re a generation seemingly more obsessed with commerce than with art. After all “e be art we go chop?” (loosely translated, this pidgin English means, “is it art that will feed us?”). I know many young entrepreneurial visual artists, musicians, fashion designers and filmmakers who make work on shoestring budgets that is magical and can transcend borders.

As I was about to leave the garden my song Forget Dem came on. A group of young guys sang along as loud as they could, eager to let me know they recognised me. I smiled, appreciative.

I contemplate giving them a peek behind the curtain. If only they knew that the song they hear on the radio, which accompanies the music video they see on TV, was recorded in a tiny ghetto studio in Tema. How dumsor rudely interrupted our session, how super producer Killbeatz rented a generator in defiance of the power gods. But I don’t. After all, when it comes to being an artist in Ghana, “nowhere cool” – our way of saying the grass isn’t greener on the other side. Still, we power on, fuelled by passion. Oh the joys of being young, restless and creative in Africa. No stopping us now.