Arteta backs Kroenkes and thinks fans would grow to like them 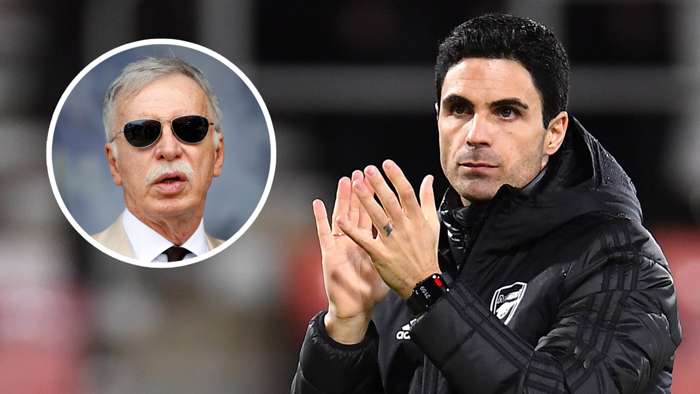 Mikel Arteta says Arsenal fans “would be surprised” if they got to know Stan and Josh Kroenke and welcomed the statement issued by the owners reaffirming their commitment to the club.

Kroenke Sports & Entertainment (KSE) announced on Tuesday that they had no intention of selling Arenal, amid much-publicised interest in a takeover from Swedish billionaire Daniel Ek.

The founder and CEO of Spotify is expected to make an offer for Arsenal in the coming days and has enlisted the support of club legends Thierry Henry, Dennis Bergkamp and Patrick Vieira.

But the Kroenkes remain adamant that they will not be selling, despite the large scale protests from fans against their ownership before last Friday’s game against Everton.

Arteta has welcomed that commitment and believes Arsenal supporters would be surprised by their owners if they heard from them on a more regular basis.

When asked whether Stan Kroenke should communicate more with fans in the future, Arteta said: “If we all feel that is necessary and that would be helpful, I’m sure they would do anything it takes to bring the fans closer to them.

“If they (Arsenal fans) get the opportunity to know them, I think most of them would be surprised. And if that is the case, I think that will benefit everybody at the football club.

“It will benefit the fans and bring a lot of clarity. If there is a way to do that and it is going to be helpful, let’s do it, if that is what is necessary.”

Arsenal’s manager has once again stated his belief that the club’s current owners want to do all they can to bring success to Emirates Stadium.

He told reporters: “I said from the beginning what my perception was.

“Everything that I sense, all the communications I have with them and they are fully excited and committed to this project, and they really want to push everybody to do what we want to do.

“I think it was very clear and took any doubt out of the situation.

“I cannot control the speculation and what is going on. What I like to talk about is the reality and the reality is we have owners that are really, really committed.

“They want a successful team on the pitch and they are going to do everything they can to achieve that. This is what we have and I feel fully supported with them.”

Is takeover talk a distraction?

But Arteta says the time is now right for everyone to to move forward following the statement issued by KSE on Tuesday.

“A lot of talk and a lot of speculation has been surrounding the situation in the last week or so,” said the Arsenal boss.

“Our fans raised their voices during the match against Everton. But now we have a very clear and very committed statement from the ownership.

“I think that it (the speculation) is gone when they said what they did, they showed the commitment and the desire to take the team where we all want.

“I think it is very clear where we are moving forward.”

DISCLAIMER: The Views, Comments, Opinions, Contributions and Statements made by Readers and Contributors on this platform do not necessarily represent the views or policy of Multimedia Group Limited.
Tags:
Arsenal
Kroenke Sports and Entertainment
Mikel Arteta