As sun sets on glorious World Cup, France-Croatia final is one last chance to shine 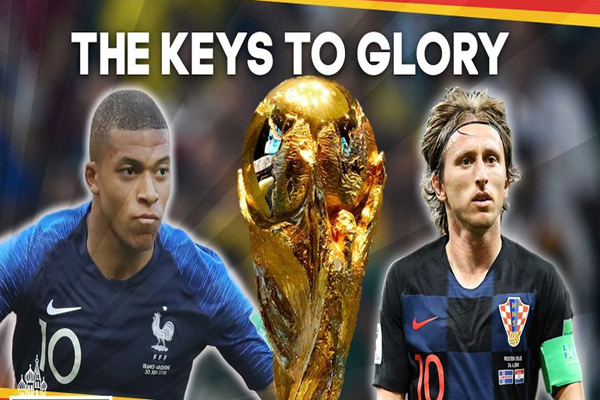 We’ve reached the last day of an extraordinary World Cup, one sure to enter the archives as perhaps the finest in soccer history.

FIFA, the sport’s international governing body, tends to exaggerate anything under its authority, but on Friday, its charming Swiss president, Gianni Infantino, was onto something when he called it a “fantastic, incredible, unbelievable World Cup.”

The well-run tournament has blessed the masses with spellbinding theater, few duds and 20 go-ahead or tying goals after the 80th minute. There was a rousing run by the low-ranked host team, the early dismissal of the reigning champion, the fall of titans, the Viking Clap and an unconventional final four.

The crowning moment will play out Sunday at Luzhniki Stadium between teams with disparate histories in not just soccer, but just about everything.

On the sporting front, France has won championships at every level of men’s soccer. Croatia, a small and young nation that has manufactured a disproportionate number of world-class players, has won exactly nothing.

But after a tournament of 63 matches in 12 venues across four weeks in 11 cities and four time zones from the Baltic to the Urals, these two will clash before almost 80,000 spectators and an estimated 1 billion watching on TVs, laptops and smartphones.

“There is nothing more beautiful,” French Coach Didier Deschamps said Saturday, “than to play in a World Cup final.”

Deschamps ought to know. He captained France’s first and only championship squad in 1998 and, with a victory here, would join Brazil’s Mario Zagallo and Germany’s Franz Beckenbauer as the only men to raise the famous trophy as both player and coach.

Deschamps’s Les Bleus are the favorites, but not definitively. Stacked with elite players, they have left audiences wanting more — a shortcoming that falls largely on Deschamps, a former blue-collar midfielder, and his careful approach. Even with Kylian Mbappe, the electrifying 19-year-old attacker, France has remained in third gear for much of the tournament.

Acutely focused on the prize, the French have not allowed external forces to affect them.

Twice Saturday, goalkeeper Hugo Lloris accentuated the importance of staying in the “bubble.”

“We have risen to the challenge,” he added stoically. “The challenge tomorrow is bigger.”

Contrasting Deschamps’s calculated approach, the Croatians have embraced their historic surge and seem fully at ease ahead of both their first appearance in the final and their bid to become the smallest country to win the title since Uruguay in 1950.

“We can’t be more proud when we see how much joy we’ve brought” back home, Coach Zlatko Dalic said. “Win or lose, there will be a seismic event.”

It’s already been seismic. After breezing through group play with three consecutive victories, Croatia has overcome three straight deficits in the knockout stage in defeating Denmark and Russia on penalty kicks and England in extra time.

“It does show there is something very special in this team,” Lloris said of his foe. “They have players of great individual talents. That has been the case for many generations. They also have an incredible collective strength. We’re going to have to play a perfect match.”

Croatian concerns about fatigue — given 90 additional minutes over the three knockout matches and one less day of rest since the semifinals — have been cast aside as tired legs have gained strength from a wave of national pride.

“There are 4.5 million players on the pitch,” midfielder Ivan Rakitic said in citing Croatia’s estimated population. “We will carry one another. The unity, the pride, it’s incredible.”

Given the World Cup’s recent history, Sunday’s match could very well require additional time, as well. In 2006, France lost to Italy on penalty kicks. In the two subsequent finals, Spain’s Andres Iniesta and Germany’s Mario Goetze became national heroes by scoring in 30-minute sessions against the Netherlands and Argentina, respectively.

Despite Croatia’s smallness in land and population, this is not a case of a puny soccer nation surfacing out of nowhere. Retaining the development and refinement of talent since breaking from Yugoslavia in 1991, the country has manufactured the quality capable of advancing deep into a major tournament.

Twenty years ago, it reached the World Cup semifinals before losing to France. In subsequent years, however, the Croatians either failed to quality or bowed in the group stage.

Getting to Russia was not easy either. Dalic took charge in October after a 1-1 home draw against Finland.

“He entered the picture at a very difficult moment,” midfielder Luka Modric said. “Our qualification was in doubt. He talked us up and gave us self-belief and confidence.”

Victory at Ukraine and triumph over Greece in a two-leg playoff secured passage.

And as the Russian campaign reaches the climax, “now, there is no pressure,” Dalic said. “It’s going to be a full house [and] the whole world is watching. You go out and play your best football. Don’t let anything lead you astray. Simply, this is the greatest moment in the lives of all of us.”

Winning would cap an extraordinary seven weeks for Modric, the ringleader, who on May 26 won a third consecutive UEFA Champions League title with Real Madrid.

Les Bleus has never lost to Croatia in five meetings, but, Dalic said, “tradition is there to be demolished. Tomorrow is the World Cup final. We don’t mind who is on the other side of the pitch. We want the whole world to watch Croatia play. We want most of the world to root for us.”