Asamoah Gyan’s return will be negative but… – Foh-Amoaning

Asamoah Gyan’s return to the Senior National Football Team, Black Stars “will be negative,” a sports consultant and analyst has hinted.

He is optimistic that should the Coach, Kwasi Appiah, and the technical team look beyond themselves and reach out to persons with the requisite experience and influence to help them, the existing quagmire will be a blessing in disguise.

“Being a star comes with ego,” Foh -Amoaning noted, but “It is part of the job of the coach to manage these issues. Going forward we must look outside for permanent solutions,” he added.

Asamoah Gyan, who until recently was the Captain of the senior national football team stirred a national conversation when he unexpectedly retired from the team.

In a public statement to that effect, he said his decision was predicated on plans to take away the captainship from him.

“Upon consultation with my family and team and as an active footballer and captain of the national team, if the decision is to give the captaincy of the tournament to another player while I am named in the team of the tournament, I wish to recuse myself from the tournament,” his resignation and retirement letter said in part.

The Presidency has in a statement on Tuesday confirmed the meeting, which included members of the management team, the coach and Asamoah Gyan, who joined via telephone conversation.

Among other things, the president called on Gyan to reconsider his decision to retire from the National team and make himself available for selection.

This has been followed by a statement rescinding his decision.

This controversy is coming barely a Month to the 2019 African Cup of Nations in Egypt. Ghana hopes to do well in the tournament after 37 years of failed attempts to secure a fifth title.

Mr. Moses Foh-Amoaning said the situation could have been handled “slightly better than this one.

“It is sad that it has happened the way that it did.”

The recurring nature of this situation means that it is about time to look beyond the team for solutions. “It is not the first time Gyan has left the team. It took former President John Agyekum Kufuor’s intervention to bring him back previously.

“It even happened in the case of the Ayews (Dede Ayew and Rahim Ayew, members of the senior national team), CK Gyamfi (late Charles Kumi Gyamfi, former captain of the national team) and a host of others” but solutions outside of the team birthed positive results. Mr. Foh-Amoaning claimed.

The over-reliance on technical team members, whose competence in most instances is limited to the field of play, has not helped in resolving these challenges.

“Look for people who are respected by the players. These matters are not handled by the coaches alone.”

The Sports Consultant has called for an all hands on deck approach. 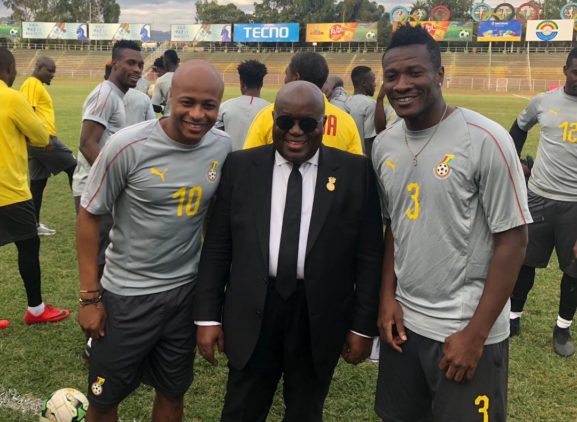 As a stop-gap measure, Mr. Amoaning wants the coach to clearly define the role of Mr. Gyan. This will prevent role conflict in the team.

The coach must also clearly state the reasons behind his recent decisions. According to him when decisions are not properly explained people may impute negative motives to an otherwise well-intended decision.

Mr. Foh-Amoaning has also called on key players in the team to also act in ways that move the team forward rather than undermine it.

Whoever is assigned with the role of captain must reach out to all. And so must senior players continue to inspire everyone.