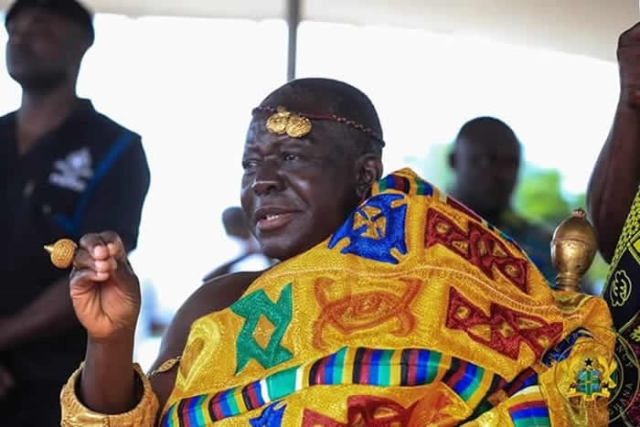 The Manhyia Palace in Kumasi, the royal seat of the Asante Monarchs, on Sunday, April 21, became the venue where the world’s wide array of different cultures, were richly woven together in elegant colours, to depict the beauty of cultural unity in diversity.

The impressive and exciting “Akwasidaekese”, a grand durbar, that climaxed a litany of events commemorating the 20th anniversary of the enthronement of Otumfuo Osei-Tutu II, the Asantehene, and the 16th occupant of the Golden Stool, pulled a mammoth crowd from different creed, ethnicity and cultures, across the globe, to join in the celebration with the Great King.

It was all colour, at “Dwaberem”, the forecourt of the regal citadel, as traditional chiefs, seated in full regalia, under a canopy of giant multi-coloured umbrellas, amidst the reverberating and pulsating sounds and rhythms from the “Fotomfrom” and “Mpintin” drums, the “Atenteben” and “Ntahra”, awaiting the entry of the august celebrant.

As if the popular Kente, the splendidly designed woven African fabric was the dress code, most of the people including Nana Addo Dankwa Akufo-Addo, the President of Ghana, himself, wore different designs of the traditional cloth. Foreign nationals, would not be left out.

Some also could not help but move their bodies intricately to the rhythmic music that the traditional drums provided.

The canopy of umbrellas, the fully-adorned chiefs and participants combined, to give the Dwaberem, a panoramic view of a sea of variegated colours.

The event reached a crescendo when His Royal Majesty, the Asantehene and Nana Ama Konadu Panin, the Queen of Asante, adorned in gold ornaments and resplendent in a majestic Kente cloth, after parading through some of the principal streets in the city of Kumasi, riding in a palanquin, entered the durbar grounds preceded by a long, serpentine retinue of chiefs, amidst the firing of musketry.

In spontaneous outbursts of joy, the enthusiastic crowd hailed and mobbed the King. Distant on-lookers had to climb heights to catch a glimpse of him.

Earlier, Ya Na Abubakari Mahama II, the King of the Dagbon, had entered the durbar grounds riding on a horseback, amid the display of galloping horses that led his entourage.

In a scenario only akin to the biblical King Solomon, the event attracted the likes of former Nigerian President Olusegun Obansango, the Emir of Kano State, Mahammadu Sanusi II, and the Vice President of Surinam, Ashwin Adhim, who led a 15-member delegation.

Representatives of the United Nations, a royal delegation from Denmark, Spain, Namibia and Morocco, the diplomatic corps, among other notables, travelled from far distances, to show solidarity and love to the Asante King.

Traditional rulers from the Volta Region, including the Awomefia of Anglo, Togbe Sri, others from Nzema, Bono East, Ahafo and across the country, were also there.

They paid homages to the King and expressed their felicitations to him as he sat in state.

Countless gifts had since the beginning of the 40-day long celebrations been showered on him by well-wishers.

In an anniversary speech, the Asantehene expressed deep gratitude to all his well-wishers who travelled far and near from across nations and oceans to grace the occasion.

“We are humbled by the presence here of so many emissaries and eminent chiefs who have travelled from far and near across oceans and continents to share with us the tidings of Amity and fraternity.”

Epics from high profile personalities including, his wife Lady Julia Osei-Tutu and President Nana Akufo Addo, had also eulogized the King’s feat during his 20-year reign, landmark among them which stood him out as an icon of peace, is the successful brokering of a peace process, in the long-standing chieftaincy feud in the Dagbon area.

The King has also been leading efforts at promoting education.

In excess of 300,000 students from across the nation had benefitted from the Otumfuo Education Fund, he set up immediately after his coronations.

This came in the form of scholarships and bursaries – bringing hope and providing an opportunity for people from poor homes to live their academic dreams.

The celebration continues with other fascinating events including a golf match.

Otumfuo Osei Tutu would be treated to a banquet to be hosted by the President of Ghana.

A throwback of his enstoolment

The Asantehene, known in private life as Nana Kwaku Duah, was enthroned as the 16th king of Asante on 26th April 1999, to succeed his late nephew, Otumfuo Opoku Ware II.